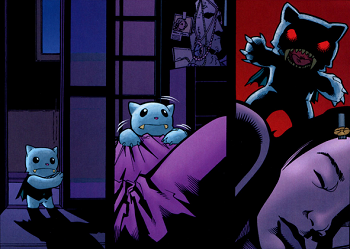 Cute is... disturbing and unnatural.

Cute Is Evil happens because people (both In-Universe and in Real Life) slide to the cynical end of the Sliding Scale of Idealism Versus Cynicism. It is also related to the phenomenon of people losing the ability to think critically around cute things - thus being an ideal cover for a Person of Mass Destruction.

Parents and older siblings tend to hate cute. Brothers especially hate cute, as it is contrary to more manly forms of expression. Male television executives in charge of programming try to keep girls liking cute as long as possible.

Cute is often evil in Darker and Edgier works. In extreme cases, cuteness is a sign of someone being an Uncanny Valley inhabitant or Eldritch Abomination.

A frequent component of Subverted Innocence tropes such as Cute and Psycho, Corruption by a Minor, Killer Rabbit and Crap Saccharine World.

If they succeed at causing death and destruction, this trope will likely overlap with Grotesque Cute.

Examples of Cute Is Evil include:

Retrieved from "https://allthetropes.org/w/index.php?title=Cute_Is_Evil&oldid=1944145"
Categories:
Cookies help us deliver our services. By using our services, you agree to our use of cookies.