Everything About Fiction You Never Wanted to Know.
(Redirected from One Hit KO)
Jump to navigation Jump to search 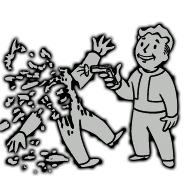 Anytime people gather with the goal of hitting each other until one of them falls over, the ultimate trump card would be a weapon, spell, technique, trick or what-have-you that makes people fall over immediately, without all that annoying strategizing and healing and stuff. The One-Hit Kill is that trump card.

Often, the One-Hit Kill isn't humble enough to just kill, instead petrifying, permanently polymorphing, or banishing its victim to the Phantom Zone.

Usually, the One-Hit Kill comes at a price. Sometimes it's a Dangerous Forbidden Technique which to use requires Casting From Hit Points, other times it's just really hard to pull off, or leaves you wide open for a counterattack. In electronic RPGs, it's frequently a Useless Useful Spell because of low hit rates, inability to affect bosses, or a prohibitive cost required to cast it, if not all three combined (Tabletop RPGs, by contrast, have a history of letting those pesky spellcasters make these spells insufficiently useless, turning many fights into a game of "who gets insta-killed first"). In martial arts, it frequently takes the form of the Touch of Death. If it only works at the start of a fight, it's a Back Stab. If it only works at the end of a fight, it's a Finishing Move. If every enemy attack is a one hit kill, the protagonist is a One-Hit-Point Wonder.

Examples of One-Hit Kill include:

Retrieved from "https://allthetropes.org/w/index.php?title=One-Hit_Kill&oldid=1948950"
Categories:
Cookies help us deliver our services. By using our services, you agree to our use of cookies.