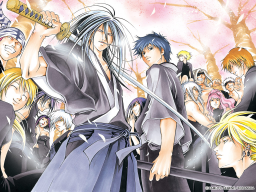 And that's just the main cast.

Imagine if George Washington, Benjamin Franklin, and Thomas Jefferson teamed up with Johnny Appleseed and Pocahontas to fight the Salem Witches, who have resurrected King Richard the Lionheart and the Knights of the Round Table in order to take over the world--now stir it into an Anachronism Stew, put it all in Japan, and you've got Samurai Deeper Kyo.

Samurai Deeper Kyo is a thirty-eight volume manga about the exploits of Shiina Yuya, a sixteen year old Bounty Hunter seeking revenge for her older brother's death, who meets Mibu Kyoshiro, a medicine peddler, and Demon Eyes Kyo, who is trapped in Kyoshiro's body.

And then it gets complicated.

Cue Loads and Loads of Characters, loads and loads of Character Development, lots of Badassery, several Quirky Miniboss Squads, several BFSes, and what is probably the biggest Bodyguard Crush in history.

Tropes used in Samurai Deeper Kyo include:
Retrieved from "https://allthetropes.org/w/index.php?title=Samurai_Deeper_Kyo&oldid=1827805"
Categories:
Cookies help us deliver our services. By using our services, you agree to our use of cookies.