Legacy of the Force 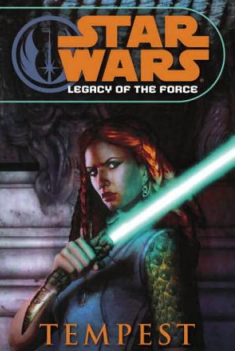 A nine-book series set in the Star Wars Expanded Universe, about eleven years after the New Jedi Order. Written in trios by Aaron Allston, Karen Traviss and Troy Denning. Opinions on this series are mixed, as you can see by the examples.

To make a nine-book-long story short: once upon a time there was a Jedi named Jacen Solo, who starts having prophetic Force visions that, if he doesn't turn to The Dark Side and become a Sith lord, Rocks Fall and Everyone Dies. So he turns to the Dark Side and becomes a Sith lord, getting co-rulership of the galaxy in the process, and alienating a lot of people, such as his parents, Han Solo and Leia Organa; his uncle Luke Skywalker, aunt Mara Jade and cousin Ben Skywalker; and his twin sister, Jaina Solo. Jacen justifies his continuing Face Heel Turn with a lot of I Did What I Had to Do; an attitude his Sith teacher, Lady Lumiya, encourages. Driving Jacen, furthermore, is concern for his lover, Tenel Ka, whose relationship to him is secret because she's the crown princess of a very vindictive culture…and their daughter, Allana, whose existence is even more secret. Umm… Does This Remind You of Anything?

Notably, each author had a sort of pet character set that was almost entirely ignored by the other two. Allston had the aged pilot-general Wedge Antilles, and by extension Wedge's family and friends. Denning had the Barabel Jedi Saba Sebatyne and the morally-questionable Jedi Alema Rar. Traviss had Boba Fett and the Mandalorians, to the greatest degree of the three.

For more details, check out Wookieepedia's entry on the series (spoilers abound, natch).

The books, in publishing and chronological order, are as follows:

Not to be confused with Star Wars Legacy, although both of them have a Crapsack World and ignoble Skywalkers.

Tropes used in Legacy of the Force include:
Retrieved from "https://allthetropes.org/w/index.php?title=Legacy_of_the_Force&oldid=1681448"
Categories:
Cookies help us deliver our services. By using our services, you agree to our use of cookies.