Everything About Fiction You Never Wanted to Know.
(Redirected from Star Wars Legacy)
Jump to navigation Jump to search 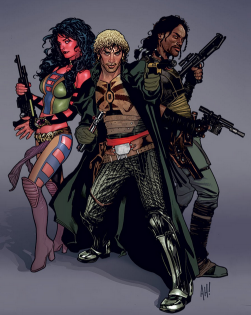 Star Wars: Legacy is an American comic book series set in the Star Wars Expanded Universe. The series, published by Dark Horse Comics, is written by John Ostrander and Jan Duursema, and illustrated by Duursema and others, with inks by Dan Parsons and color by Brad Anderson. Issue #0, which cost 25 cents and introduced the setting and major characters, was released on 7 June 2006. Despite being Dark Horse's second best-selling title (after the Buffy comics) the series was canceled for unknown and inexplicable reasons in early 2010. The final issue, Star Wars Legacy 50: Extremes, Part 3, was released July 28, 2010. Thankfully, a new miniseries, Star Wars: Legacy-War, was released in December to conclude the series.

Star Wars: Legacy is set 133 years after Return of the Jedi. The comics feature Cade Skywalker, a descendant of Luke Skywalker, who was trained as a Jedi but has abandoned the order. He apprenticed himself to the pirate Rav and lives among bounty hunters, smugglers and pirates. Cade has also dropped his last name. The series begins with an attack on the Jedi Temple and the overthrow of the Galactic Empire by a newly created Sith order.

Not to be confused with Legacy of the Force.

Now with a character sheet.

Tropes used in Star Wars: Legacy include:
Retrieved from "https://allthetropes.org/w/index.php?title=Star_Wars:_Legacy&oldid=1807228"
Categories:
Cookies help us deliver our services. By using our services, you agree to our use of cookies.