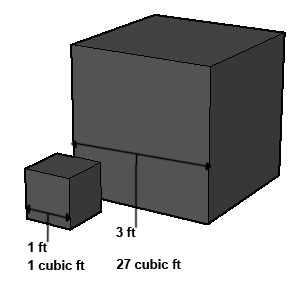 The smaller cube will be three times as agile as the larger cube. (Assuming they are capable of movement.)

For example, if you double the size (measured by edge length) of a cube, its surface area is quadrupled, and its volume is increased by eight times.

The point of this law is that with living beings, strength is (more or less) a function of area,[1] but weight is a function of volume. And Newton's famous Second Law (the "force = mass * acceleration" one) means that if you double a critter's size, you end up with four times the muscle power moving eight times the mass, so instead of having the same relative agility as the original, the double-sized creature actually has only half.

This applies to flyers as well: Double the size, and you get four times the wingpower attempting to keep eight times the weight airborne, so the creature's ability to fly has actually been cut by half.

On the other hand, the buoyancy of aquatic swimmers is completely unaffected by the law because it's a function of density—weight divided by volume, both of which change at a cubic rate. Good news for whales.

A full explanation is a lot more complicated due to subtler biological factors (muscle/bone stress, required oxygen uptake, dissipating body heat, etc.), the gist of it is the same in every case: You can't just scale something up (or down) to a different size and expect it to still work the same way as it used to.

The law is not limited to living creatures, but applies to anything with mass (and, well, everything has mass): A skyscraper twice as wide and tall as another will have eight times the weight, and require a far stronger support structure—wood and brick just can't hold the weight. Likewise, the humanoid Humongous Mecha needs incredibly strong legs to hold its massive frame upright (probably some sort of Unobtainium), and that's not even considering how the ground beneath it also needs to be able to support that same amount of weight without caving in, or the fact that it needs some incredibly powerful motors just to get those powerful legs and arms moving (which is why we call them Impossibly Graceful Giants).

Knowing that audiences are becoming more savvy about this as compared to the days when Attack of the 50-Foot Whatever and the Incredible Shrinking Man were safe, standard plots, many creators who knowingly break the law will try to invent some Art Major Physics to justify or Hand Wave how their creation can get away with breaking it—say, the Applied Phlebotinum didn't just change their size, but also does something else to sustain their new size and counter the Law's negative effects upon them.

See Attack of the 50-Foot Whatever and Humongous Mecha for examples of media ignoring the Square-Cube Law. Sometimes justified by the use of Required Secondary Powers. Compare Muscles Are Meaningless and Pint-Sized Powerhouse.

Examples of Square-Cube Law include: