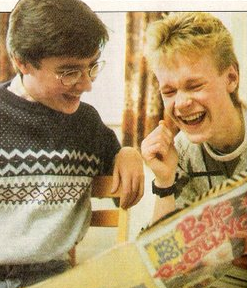 Adrian, Nigel, and a magazine they'd get in trouble for possessing.

A series of books, written as journals, by Sue Townsend, centering around the life of Adrian Mole, a British everyman. It starts out when he's 13¾, and the series runs until his early forties.

Books in the series:
The following tropes are common to many or all entries in the Adrian Mole franchise.
For tropes specific to individual installments, visit their respective work pages.
Retrieved from "https://allthetropes.org/w/index.php?title=Adrian_Mole&oldid=1914165"
Categories:
Cookies help us deliver our services. By using our services, you agree to our use of cookies.