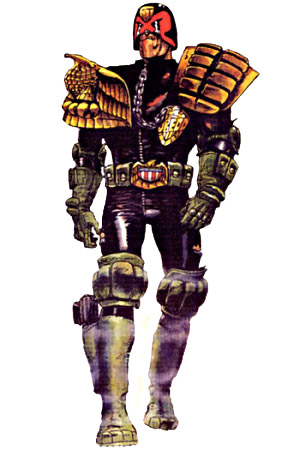 A long-running Sci Fi comic created by John Wagner, Carlos Ezquerra and Pat Mills, and starring the iconic character from the British Anthology Comic 2000 AD, Judge Dredd follows the adventures of brutal Knight Templar lawman Joe Dredd, who cleans the streets of the grim, far-future megapolis Mega-City-One, a gigantic, decaying and crime-ridden urban sprawl which covers most of what used to be the East Coast of the USA. Dredd is a "Judge", a veteran officer in a law-enforcement force whose operatives quite literally act as Judge, Jury, and Executioner in a world where the criminal justice system and democratic government have long since disintegrated as a result of countless catastrophes and worldwide wars.

The series is part Dystopian Sci Fi adventure, part satirical Black Comedy. Mega City One embodies the social problems, urban decay and political issues of British and Western society since the 1970s turned Up to Eleven, with Dredd and the Judges a satire of the worst excesses of police and government authority, though some people seem to think his methods are a jolly good idea.

The series is also notable for its moral complexity. By his very nature and purpose, Anti-Hero Dredd is an unapologetic fascist, firmly committed to his organization's brutal and ruthless methods of law enforcement, but it's firmly established that the society of Mega-City-One would collapse without him and his fellow Judges, and more than once has. Though Dredd is impeccably honest and honorable, has had some Pet the Dog moments throughout the years, and has been given cause to question his purpose more than once, democracy within his society is depicted as simply unworkable.

For those that like their classical philosophy texts, Dredd's world has a distinct air of Plato's Republic about it ...

As well being the hero of the longest-running strip in 2000 AD, having appeared since the second issue, Dredd has appeared in his own series of comics and audio plays from Big Finish.

Judge Dredd was also adapted into a movie starring Sylvester Stallone in 1994. A second movie, simply called Dredd and starring Karl Urban, was made in 2012. And yes, he kept his helmet on this time.

Tropes used in Judge Dredd (comics) include:
Retrieved from "https://allthetropes.org/w/index.php?title=Judge_Dredd_(comics)&oldid=1796327"
Categories:
Cookies help us deliver our services. By using our services, you agree to our use of cookies.