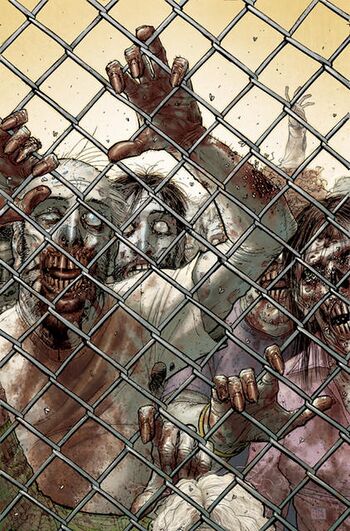 They are the least of your problems.

The Walking Dead is a Zombie Apocalypse Comic Book, written by Robert Kirkman with art by Charlie Adlard, featuring an ensemble cast (which is constantly in flux) of survivors struggling to survive over the long-term duration of the zombie uprising. The de facto main character is Rick Grimes, a police officer who was shot in the line of duty; when he wakes up from a Convenient Coma, all hell has broken loose. Rick goes in search of his family and safety, both of which end up being more tenuous than not.

While most Zombie Apocalypse comic books focus on More Dakka and Improbable Fighting Skills in order to showcase Big Damn Heroes, The Walking Dead focuses more of its action on Survival Horror and the psychological and personal relationships which result from the stress of being constantly on guard.

There is also a Live Action Adaptation television series based on the comic; it has its own page. There is also an episodic Adventure Game series by Telltale Games set in the same universe. It also has its own page. Kirkman has also co-written a planned trilogy of prequel novels to the series, the first one being Rise of the Governor. The second, The Road to Woodbury, is set for release in October 2012.

There is a Shout Out page here.

Tropes used in The Walking Dead (comics) include:

Retrieved from "https://allthetropes.org/w/index.php?title=The_Walking_Dead_(comics)&oldid=1807240"
Categories:
Hidden category:
Cookies help us deliver our services. By using our services, you agree to our use of cookies.