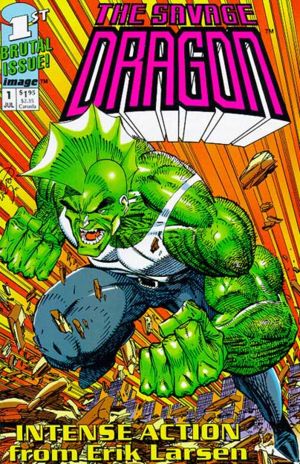 A series for Image Comics by Erik Larsen. The title character first appeared in Graphic Fantasy #1 (June, 1982). The character continued appearing through The Eighties in either self-published works or works by minor publishers. When Image was launched, Larsen had the opportunity to launch a regular series based on the character. An initial 4-issue miniseries (July-December, 1992) sold decently. Leading to an ongoing title. It was launched in June 1993 and (as of 2012) is still ongoing.

The Dragon is an extremely broad and muscular green guy with a fin on his head, who was found in a burning field by Lieutenant Frank Darling of the Chicago Police Department. With "Superfreaks", genetically and/or cybernetically-modified criminals running loose in the streets, the Dragon eventually takes up the fight against them. Not as a superhero, mind you, but as a member of the Chicago Police. This allows him to legally and openly fight crime of all sorts, and has also resulted in him being "loaned" to the Police Departments of other cities, which has led him on other adventures (such as an encounter with the Teenage Mutant Ninja Turtles Mirage). At first, his primary Arch Enemy was Overlord, the leader of a superpowered gang called the Vicious Circle. The Dragon defeated Overlord, only to create an Evil Power Vacuum that resulted in a city-wide gang war as factions within the Circle fought each other for dominance. Since then, he has met other heroes, such as Wildstar and The Maxx, gotten sent to Hell, where he encountered Spawn and witnessed God and Satan throw down over his soul, had a son, lost his son, met Hellboy, fought off a Martian invasion, and was finally suspended from the Police Department.

Since then, Dragon has become a Bounty Hunter, formed a Government Super-Team composed of many of his friends, traveled to alternate universes, found his son again, adopted a daughter, Nearly been elected President of the United States, and many, many other things.

In 1995, an animated series was aired for the USA Network's Cartoon Express. It was much Lighter and Softer than the comic, and aimed at a younger audience. It was actually rather good, due to maintaining the comic's odd humor. (Sentient leeches?)

Savage Dragon is one of the two original Image Comics Series that is still being published since the company was formed, the other being Spawn. This is likely because, unlike most other early Image Comics, Dragon quickly improved into becoming decent. It has also noticeably remained off of Linkara's radar, something that Youngblood, and Dragon spin-off Freak Force were not as lucky about.

It is perhaps notable as the only Image Comic to still be written and drawn by its creator Erik Larsen, a fact that Peter David, who once feuded with Larsen, has applauded.

This series has Loads and Loads of Characters so it naturally has its own Character Sheet.

Tropes used in The Savage Dragon include:

Angel: How come we have one of those?
Dragon: I'm in charge of it. I have to make sure no monsters escape.
Angel: If we didn't have it, no monsters could escape.
Dragon: Uh... yeah, well, you see... why don't you go bother your mother?

Dragon: There wasn't a gun. No bullet, either. I didn't have one on me, so I chewed on a dime while I was scaling the building and I spit it through his forehead.

Dragon: Well, I hope you learned something today, Angel...
Angel: Oh, I did. I learned was that you need good traction to run on chocolate.
Dragon: That's not really what I meant...
Angel: That, and it's possible to choke down broccoli if it's properly prepared.