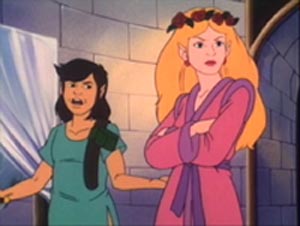 The founding father and mother of this trope.

"Why must everything you say to me sound like a criticism?"
—Robin Hood to Marian, BBC's Robin Hood

Snarky loser hero meets snarky haughty girl. They either fall in love, or they snark. Then they do the other.

This is essentially a satire of the standard Magical Girlfriend, which describes a beautiful, classy, good-mannered, loyal girl—the logical result being she should actually be somewhat critical of her loser boyfriend. She makes no attempt to ignore the fact that he is the Loser Guy, and frequently calls him on it, criticizes him, and rarely if ever fawns over him like some Fan Girl. She expects better from him and pushes him to improve, while still expecting to be taken care of. However, the guy usually takes it in stride, mocks her in return, or just says, well...

A series usually says "Aw, Look -- They Really Do Love Each Other" to avoid portraying her as a total ball buster. Often appears in Love Comedies, depending on how satirical the story is.

If it involves an actual Princess Princess, see Royal Brat. The Woman Wearing the Queenly Mask can make similar demands.

The trope name comes from the old The Legend of Zelda cartoon, where Link would quite often retort to Zelda's nagging with those words. Although more people probably identify this as one of Han's more memorable lines towards Princess Leia, which predates the Zelda cartoon.

Examples of Well, Excuse Me, Princess! include:

Elizabeth: My behavior to you was at least always bordering on the uncivil, and I never spoke to you without rather wishing to give you pain than not. Now, be sincere; did you admire me for my impertinence?
Mr. Darcy: For the liveliness of your mind, I did.

Winterbourne: I wish you would flirt with me, and me only.
Daisy: Ah! thank you—thank you very much; you are the last man I should think of flirting with. As I have had the pleasure of informing you, you are too stiff.
Winterbourne: You say that too often.
Daisy: If I could have the sweet hope of making you angry, I should say it again.

Farah: WHY DID YOU PUT YOUR SWORD AWAY?!

Kim: "Last night he had to take off his shoes to count to 12, now he's taking a genius aptitude test." Kim realises something isn't quite right with Ron Stoppable.