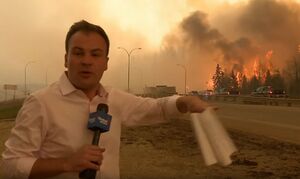 Reporter: “This is Fort McMurray burning, We’re right in the thick of it. To be honest, I’m not sure how long we’ll be able to stay here...”

Sometimes, an anchor in a newsroom or (more likely) on the scene becomes the news. While reporting the chaos caused by a monster attacking the Capital City or the destructive force of some sort of massive natural or supernatural disaster or another kind of dangerous situation, he or she happens to fall victim to that very event he or she was reporting on.

In many cases, right before this trope is invoked, the audience will get some clue foreshadowing the reporter's fate: a strange noise in the distance, for example. We Are Experiencing Technical Difficulties often follows.

A subtrope of Apocalyptic Log and Ignored Vital News Reports. Often overlaps with Red Shirt Reporter if the reporter is reporting on-scene and dies. Not related to Spinning Paper. See also The Fourth Wall Will Not Protect You.

Examples of Dead Line News include: 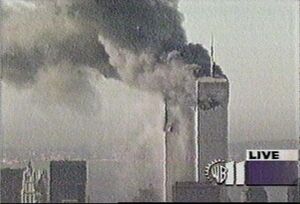 WPIX 11's satellite feed froze with this image when the station went off-air on 9/11
Retrieved from "https://allthetropes.org/w/index.php?title=Dead_Line_News&oldid=1824408"
Categories:
Cookies help us deliver our services. By using our services, you agree to our use of cookies.