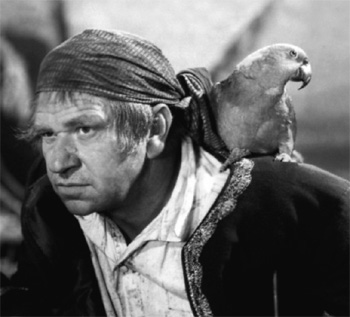 Diabolical Masterminds have the Right-Hand-Cat. Pirate Captains have the Pirate Parrot. Expect these colorful feathered companions to be chatty and demand crackers. Pirate Parrots usually ride on the shoulder of their pirate owner.

The parrot may or may not:

In Real Life, it is not known if many pirates actually kept parrots for pets. Parrots are high-maintenance animals that serve no benefit on a ship (unlike, for example, cats, which keep the vermin population down). However, there are records of the occasional (non-pirate) Caribbean sailor keeping parrots and even monkeys as pets, so it's not too unlikely. The whole concept of a pirate and his parrot companion likely started with Treasure Island. And parrots in Real Life do naturally prefer to stand on a person's shoulder.

Expect some amount of Misplaced Wildlife. Cockatoos, for example, come from Australia and Indonesia, and would be far less likely on the shoulder of a Caribbean pirate than a macaw or Amazon of Central and South America. Then again, most animated parrots are some strange conglomeration of psittacine characteristics rather than realistic; macaw-shaped and colored, Amazon-sized, with a cockatoo crest.

Examples of Pirate Parrot include: