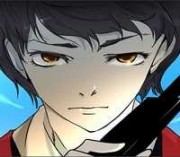 When The Woobie starts looking at you like that, you know it's time to run.

Twenty-Fifth Baam is in a strange place. He has just lost his only friend. He is staring at a monster.

He is on the lowest floor of the Tower.

His best friend, Rachel, sought the door to the Tower in order to escape the dark world they lived in. Baam simply got dragged along for the ride. But inside the Tower, everyone must make their own way to the top, and Baam quickly learns that the Tower's inhabitants have a low opinion of "Irregulars" - those who enter the Tower without invitation. Faced with the prospect of a new test on every floor and many, many, MANY intrigues and colliding stories and wills in this alien, magical realm, his determination to reunite with Rachel is the only thing keeping him going.

Written and illustrated by Slave.In.Utero, Tower of God is a Manhwa/Webtoon with 94 chapters at the time of this writing.[when?] And it is awesome.

Chapter 78 served as The End of the first series (Season 1), Slave.In.Utero went on a break, releasing a postscript for everything so far as Chapter 00, numbering which got restarted for Season 2, and so the would be chapter 81, really is Chapter 01 (Season 2).

It is currently the first officially published story of the Talse Uzer universe, previous privately uploaded stories by S.I.U. have been infokilled by the author.

The webtoon can been seen here (the text is in Korean) and on sites like Webtoon Live and Batoto (published in original format) or on various manga reading sites.

Tropes used in Tower of God include:

Retrieved from "https://allthetropes.org/w/index.php?title=Tower_of_God&oldid=1918613"
Categories:
Cookies help us deliver our services. By using our services, you agree to our use of cookies.