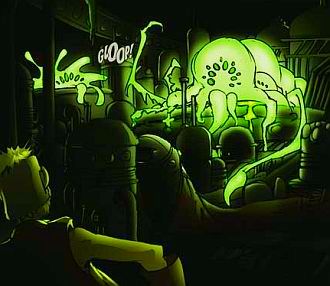 "Why is it that deadly chemicals are always green? Why can't they ever be pink?"
—Batgirl, The Batman [1]

Power Glows, but evil power glows green. Most of the time, this glow is closely related with death, as well. Good characters may wield power that has a green glow, but this is always a "healthy" or "natural" shade of green. Evil green is a more sickly, yellower shade that makes you want to take a shower to wash it off after just looking at it.

According to the principles of Technicolor Science, radiation and all things nuclear have a green glow, although this is seldom the case in Real Life (Cherenkov radiation in the pools of nuclear reactors is blue, radioactive cesium chloride fluoresces faintly blue, and hot radioactives are orange).

Not to be confused with Green Around the Gills.

Examples of Sickly Green Glow include:

Spongebob: I dunno, Squidward. That ship has a spooky green glow around it.