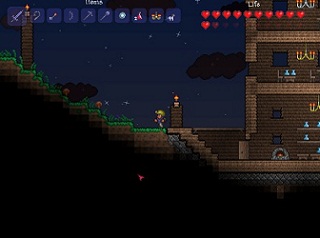 Delicious exploration in an easy to digest 2D package!

Terraria (pronounced similar to "Terrarium") is a very detailed 2D Wide Open Sandbox indie game, created by Andrew "Redigit" Spinks and Jeremy "Blue" Guerrette. It was made available on Steam on May 16, 2011. As of 02/21/2012 Redigit had ceased development of the game (which fortunately only turned out to be a long hiatus), and version 1.1 came out on the 1st of December, 2011, making the game at least thrice as complex at it previously was.

Terraria focuses on exploring the gorgeous randomly generated world you're stranded in, to find resources to build a cozy home, equip yourself with armor and potions, befriend merchants, and defend your town from monsters. You start from scratch with little more than a pickaxe and some trees -- and end up crafting epic-level equipment to fight massive demons, dig cave systems throughout the land, and build a fortress that can withstand full-on goblin army invasions. You can share every world you create with your friends in single-player and multiplayer, and freely visit any map with any character.

Sounds a bit familiar? Absolutely! Terraria is meant as a wonderful item-based RPG variation on some of the most popular randomly generated exploration games, particularly Minecraft. It's different in many ways, though: true to classic Metroidvanias, a strong focus is on finding upgrades to help you move around in the world better (such as accessories to let you breathe underwater) and increase your life and Mana pools. You can also end up with multiple helpful NPCs living in your homes that will sell things to you, heal you, and otherwise enhance your base through their services. Terraria features boss monsters that will challenge players who dare to summon them, and murder those who aren't ready. Finally, Terraria features a streamlined crafting system as well as many, many decorations so that you can truly make your home your own.

The player has the option of entering Hard Mode after clearing the first few basic quests. Hard Mode is triggered by challenging the boss of the Underworld, and spawns many new monsters, items, materials, bosses and a new, spreading biome into the world.

Version 1.3 of the game, released in June 30, 2015, was the last version made with designer Andrew Spinks's involvement (although it received several additional updates after that). Most of the development team has moved on to work on Starbound, which can be best described as Terraria In Space.

Tropes used in Terraria include:
Retrieved from "https://allthetropes.org/w/index.php?title=Terraria&oldid=1941502"
Categories:
Cookies help us deliver our services. By using our services, you agree to our use of cookies.