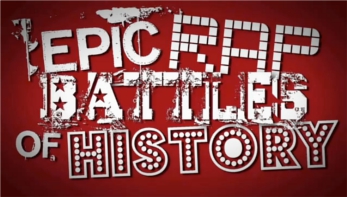 What happens when you take historical figures, popular media personalities, and a handful of fictional characters, and have them pair off and compete against each other...in rap contests?

You get, well, Epic Rap Battles of History. While the "epic" part may be disputed, otherwise it's Exactly What It Says on the Tin - a pair of comedians (Nice Peter and EpicLloyd) and guest YouTube performers portraying these people rapping off against each other in online videos.

The matchups so far have been the following [1]:

You can find the first season on Nice Peter's YouTube channel, here, and the second season on its own channel here.

Tropes used in Epic Rap Battles of History include:

Retrieved from "https://allthetropes.org/w/index.php?title=Epic_Rap_Battles_of_History&oldid=1348053"
Categories:
Cookies help us deliver our services. By using our services, you agree to our use of cookies.