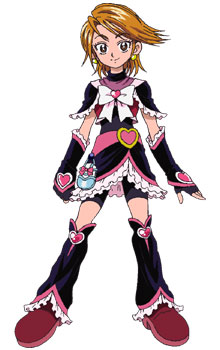 An energetic athlete who's popular with the girls (although she wishes the love letters she got in her locker were from cute boys instead), Nagisa is a tomboyish middle-class girl who would rather have fun than study. When she makes a wish on a meteor shower for a boyfriend who will love her, she instead meets Mepple and gets the power to become Cure Black. Though she's completely reluctant at first, her compassion for Mepple and Mipple as well as her desire to protect her friends convince her to save the world after all.

Nagisa's complete opposite, Honoka is a star student rumoured to be a super-genius and gets one or two love letters a month from boys. She rejects every one of them, though, because she wants an honest relationship built on mutual respect. Besides the members of the chemistry club, Honoka doesn't have very many friends; she hasn't had anyone over at her house in years and just studies instead, and even her parents are always overseas. When she went into the garden shed at her mansion, she met Mipple and gained the power to become Cure White. She loves the idea of being a Magical Girl, finding it "exciting".

Retrieved from "https://allthetropes.org/w/index.php?title=Futari_wa_Pretty_Cure/Characters&oldid=1785299"
Categories:
Cookies help us deliver our services. By using our services, you agree to our use of cookies.