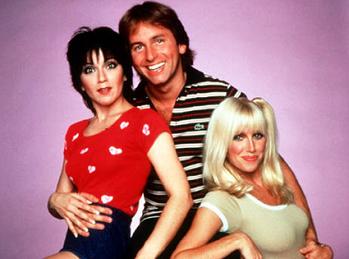 In all that time, he never thought to tap that.

The main character lives with the romantic interest for whatever reason. For some reason, everyone they tell this to will hear "lives with" as "has sex with". For some other reason, this is never the case.

Those Two Guys are often the ones who point it out. This is more common with Magical Girlfriends (because they tend not to have anywhere else to stay) and Unwanted Harems (because Pretty Freeloaders make for easier contact). With teen-aged couples in the previous two categories, this will invariably involve a Closet Sublet to assuage the Moral Guardians.

Examples of Innocent Cohabitation include: