Never Bring a Knife to A Fist Fight 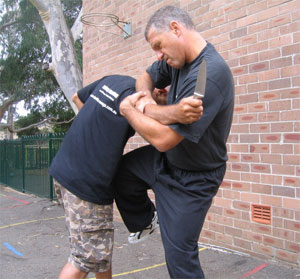 Knives are scary. A single glimmer from its profile has been known to launch a thousand screams of horror. They're eminently deadly, dangerously easy to use. Pulling one in a fistfight is, most of the time, a goddamn Game Breaker.

Not in fiction, though where they tend to be utter liabilities in a fistfight. In a Wire Fu movie, you should Never Bring a Knife to A Fist Fight, because Good Old Fisticuffs is king. Knives, guns, and any weapon that would give the wielder an advantage in a fight, especially if they're blood-spilling and are used against an unarmed opponent, have the reverse effect. They make it likelier that they'll never land a hit (Clothing Damage or minor cuts across the cheek or torso notwithstanding), and eventually get disarmed or forced to throw away their weapon.

In a good old-fashioned Western, any bounder who pulled a knife in a fistfight would get involved in a down-and-dirty rassle on the ground, then fall (or roll over) on his own blade. A descendant general rule of Hollywood remains that the first person to pull a knife almost always loses.

Much like all products of the Inverse Law of Utility and Lethality, this applies equally to Heroes and Villains, though villains are usually likelier to pack heat or hidden knives. If someone does get stabbed, shot, skewered, or otherwise hit with the blood-spilling weapon, it was Only a Flesh Wound (though regenerators are exempt). Often goes hand in hand with finding out that just like weapons, Armor Is Useless. One way to exploit this trope is to make an immobilizing Knife Outline, as the likelihood of fatally skewering someone becomes zero.

Oddly enough, a dramatic death where someone gets skewered or shot aren't subversions, since they rely on the unlikelihood of such weapons actually killing for their dramatic punch; plus, the person shot usually lasts long enough to deliver an inspiring Final Speech and turn out to be Not Quite Dead afterwards. Instantly fatal stabbings or headshots are subversions, though.

Note: This only applies to humans. In Speculative Fiction, you can skewer and dismember as many golems, undead, Mecha-Mooks or what have you as you damn well please.

See also: Guns Are Worthless, Armor Is Useless, Good Old Fisticuffs, Knife Outline,Could Have Been Messy, and Only a Flesh Wound. A subtrope of the Inverse Law of Utility and Lethality. Works where this is in play are anathema to the Knife Nut. Similar to Rock Beats Laser. Contrast Never Bring a Knife to a Gun Fight.

Examples of Never Bring a Knife to A Fist Fight include: