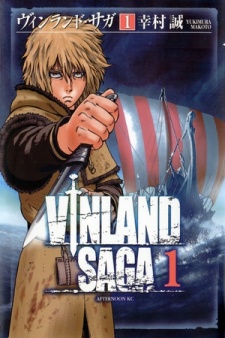 A manga series created by Makoto Yukimura, author of Planetes. Vinland Saga was started in 2005. It chronicles the adventures of a band of Vikings.

As we follow Thorfinn around, the story expands to the Danes' pacification of England of the early eleventh century and the rise to power of King Canute.

Ultimately the series has a lot of brutal (but fun!) battles. It's also fairly accurate about viking culture, so it teaches you stuff while you read (yes, it's that awesome). It's also got some pretty snappy dialogue and humorous little exchanges between characters both major and minor.

No relation to the classical viking sagas known as the Vinland Sagas, about the explorations of Erik the Red and his son Leif. Though they are alluded to through the stories of Leif Erikson, alias, Leif the Lucky.

Translated into English by Kodansha USA.

Tropes used in Vinland Saga include:

Retrieved from "https://allthetropes.org/w/index.php?title=Vinland_Saga&oldid=1922544"
Categories:
Cookies help us deliver our services. By using our services, you agree to our use of cookies.