Chronicles of the Kencyrath 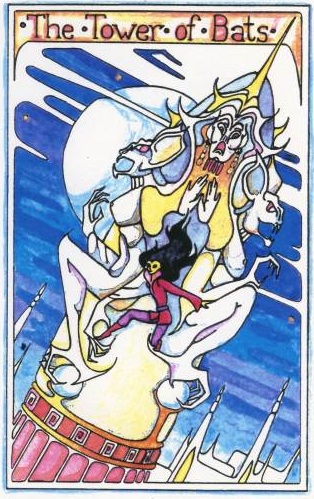 P.C. Hodgell's own artwork depicting heroine Jame atop the Tower of Bats in the city of Tai-tastigon.

P.C. Hodgell's Chronicles of the Kencyrath High Fantasy series consists of six novels (God Stalk, Dark of the Moon, Seeker's Mask, To Ride a Rathorn, Bound in Blood, and Honor's Paradox) and a short story collection (Blood and Ivory: A Tapestry).

They follow Jame, a young woman of the non-human Kencyr people with an uncertain past who attracts disaster and destruction seemingly by her very existence. She's a catlike, acrobatic Action Girl with, she soon discovers, extraordinary ability in unarmed combat and dances that seem to have a hypnotic, magical effect on the watcher.

At first, she takes cautious root in the great city of Tai-tastigon, where she joins the Thieves' Guild, learns more about her people, experiments with the nature of divinity, and in general finds herself during the first book, God Stalk. The second book, Dark of the Moon, sees Jame setting about finding her long-separated twin brother and their people, and along the road learning much more of what she is and her place in the long tragedy of their history. The third book, Seeker's Mask, finds Jame almost destroyed from trying to fit into the cage her people expect her to live in, and breaking out and, painfully, finding a new place, which the following books, To Ride a Rathorn, Bound in Blood, and Honor's Paradox have her taking on and learning the responsibilities and duties attached to a Military Academy and the world. There is also a short story collection, Blood and Ivory, where the short stories mainly fill in the world and its background. Several of these are now regarded as non-canonical.

The series manages to be simultaneously Trope Overdosed and full of fantasy clichés and yet packed with imagination, new ideas, and twists on the ones we're used to. Hodgell tosses ideas casually into the story that could be the basis for whole novels from another author, but here are just little details of the setting. While other writers have people who perform magic, Hodgell's whole world is magical down to the core of its nature, and full of wonders to discover.

While the series is sometimes incredibly gloomy, it is also, at times, hilariously funny. Both the author and her characters manage to see absurdity in even the darkest places, and Jame, always a very physical heroine, is a rich source of Slapstick physical comedy as well as wry thoughts.

These books have had a spotty and very drawn-out publication history and have been hard to find, leading to a small, cultish fanbase; recently, though, she's been picked up by Baen Books and the older books have been re-released, including ebook formats.

We are collecting tropes for the new novel, Honors Paradox, on its own page. This will be full of spoilers, so beware! If you want to contribute, go to Baen's website and buy the e-ARC.

Less central character-specific tropes are being moved to the character page. There is also a Wild Mass Guess page for crazy theories.

Tropes used in Chronicles of the Kencyrath include:

Retrieved from "https://allthetropes.org/w/index.php?title=Chronicles_of_the_Kencyrath&oldid=1726591"
Categories:
Cookies help us deliver our services. By using our services, you agree to our use of cookies.