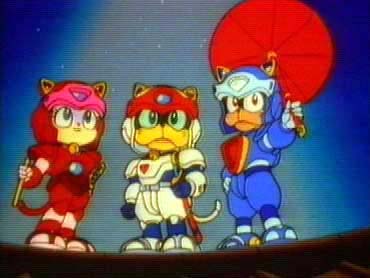 Samurai Pizza Cats is The English dub of Kyattou Ninden Teyandee (キャッ党 忍伝 てやんでえ, "Cat Ninja Legend, What Are You Talking About"[1]), licensed by Saban Entertainment, who didn't manage to get transcripts of the original anime dialog (or just horribly translated scripts, according to the writer). As such, the writers had to make up stories and dialog out of whole cloth. It seems to have worked fairly well, all things considered. The show pretty much got turned into a really well-written Gag Dub, and the series is actually better known around the world as "Samurai Pizza Cats" than the original source.

As for the plot: the eponymous Cats are the owners/employees of a pizza parlor, who defend their city and the royal family (pushy, spoiled Princess Violet [Usa-Hime], and her demented father, Emperor Fred [Shogun Tokugawa Iei-Iei]) from the machinations of the villainous Big Cheese (Kon-no-Kami). Between the giant robots, the ninja crows and the, um, peculiarities of their emperor, this is both harder than it sounds and easier than it ought to be.

While the plots can be a bit formulaic, most of the show's appeal comes from the humor and the lame puns (some main characters being Speedy Cerviche [Yattarou], Guido Anchovy [Sukashii], Polly Esther [Pururun] and "Big" Al Dente [Wanko-no-Kami]), and an astounding number of running gags.

The show is notable for being perhaps the only heavily edited, rewritten and hacked-up anime dub which international fans actually prefer to the original.[2] While the original show also took a light-hearted and goofy approach to its action show format, the English Pizza Cats is chock full of sly references, shameless puns, rapid-fire sardonic humor, and a total refusal to so much as acknowledge the fourth wall.

Despite what you may have heard, it is not a lame Teenage Mutant Ninja Turtles rip off, but a decent cartoon that can stand on its own merits. (It was, however, licensed as part of a TMNT Follow the Leader movement.) To quote the theme song, 'These 'Cats have more fur than any Turtle ever had!'

Retrieved from "https://allthetropes.org/w/index.php?title=Samurai_Pizza_Cats&oldid=1931910"
Categories:
Cookies help us deliver our services. By using our services, you agree to our use of cookies.