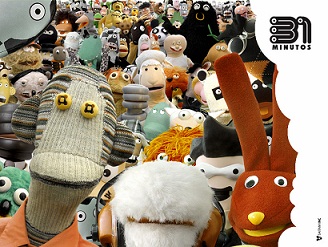 31 Minutos [2] was a Chilean TV series, which parodied the news shows format, hosted by puppets.

The whole idea behind the show was seeing how disastrous things could get on-air and off-air, with characters fighting each other, and Juanín trying to get everyone to do their things.

Among other things, the program had a couple of recurring sections, including the "Top-top-top-top-top music ranking" (where parodies of music videos where transmited) and "The adventures of Calcentin-con-rombos-man [3]" (a parody of super-heroes, with some aesop at the end).

Unfortunately, it was Too Good to Last, only spawning 3 seasons and a movie.

Note: For the benefit of English speakers, please provide translations for characters, episode names, and phrases. You can use reference tags, like so: name<ref>translated name</ref>

Tropes used in 31 Minutos include:

Calcetín Con Rombos Man is initially flattered and happy to see an old foe reforming, until he discovers that his products are being manufacturated by children. Slave children, forced to work on inhuman conditions, being fed just once a week and forced to drink alcohol to keep them quiet and obedient. He promptly releases the children and takes them to an Orphanage of Love.

Tulio: "That was the worst thing that had happened in my life. I even had a nose!"

Cirilo Pila: "The only way to avoid the colission would be we make explode the asteroid."
Jackson Aceituno: "And how do you know it?"
Cirilo Pila: "Because I saw it in a movie once..."