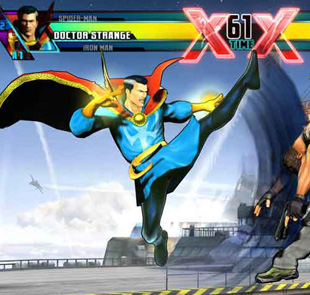 In one corner, you have the Squishy Wizard, supernaturally adept, but physically an utter weakling. In the other stands the Kung Fu Wizard, who not only has supernatural powers, but is also a skilled martial artist. In fact, their martial arts practice facilitates the use of their powers, and may actually be the source of them. This character can use both Ki Attacks and Functional Magic, or blends them together until they're indistinguishable. The Kung Fu Wizard is most often found in Chinese folklore, Wuxia books and films, Manga, and Anime.

Sometimes they may overlap with Combat Medic. Because in real life, Monks were often religious figures and in fact, some of the Eastern monks did gain a reputation for knowing or developing Martial Arts. Thus, someone who practices Martial Arts may also know a few things about exorcism, healing, or dealing holy damage. Or Buffs.

See also Magic Knight, where the wizard is trained in weapon-based combat rather than martial arts, Supernatural Martial Arts, where the kung fu is itself magic, and Full-Contact Magic, where the wizard doesn't actually know kung fu, but still needs to move around a lot to use magic. May be augmented via Meditation Powerup.

Examples of Kung Fu Wizard include:

Retrieved from "https://allthetropes.org/w/index.php?title=Kung_Fu_Wizard&oldid=1860705"
Categories:
Cookies help us deliver our services. By using our services, you agree to our use of cookies.