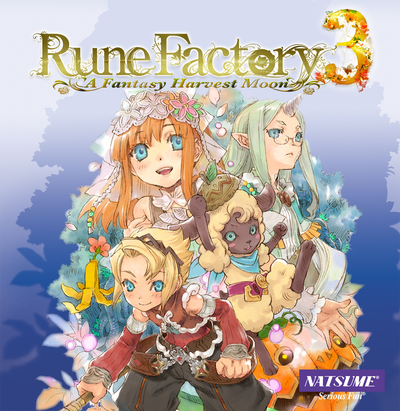 An Adventure That Will Transform You

The third installment in the main Rune Factory series, this game was released by Natsume in North American on November 9th 2010. It also makes significant improvements to combat, stats, and farming systems, as well as expanding on the message board requests introduced in Rune Factory 2.

One night during a storm, a mysterious golden-fleeced wooly collapses in front of a young girl, Shara's, house; and yet, against her grandfather's wishes, she takes in the wooly for the night. However, when morning comes around, the wooly transforms into a young man, Micah. With no memory of who he is or what he's supposed to be doing here, he escapes Shara's house, only to run into her - and a silent young woman named Raven - again not long thereafter. At the pair's suggestion, Micah decides to stay at the local farm, which happens to be housed in an enchanted tree. From there on, the story's up to the player to discover.

Tropes used in Rune Factory 3 include: