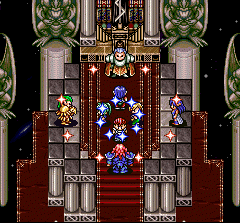 Lufia, known as Estpolis Denki in Japan, is an anachronic series of role-playing games developed by Neverland that draw on elements from many other genres, including action-adventure, monster collecting, and especially puzzle games. The main antagonists of the main games are a group of evil Physical Gods known as the Sinistrals.

Tropes used in Lufia include:
Retrieved from "https://allthetropes.org/w/index.php?title=Lufia&oldid=1679566"
Categories:
Cookies help us deliver our services. By using our services, you agree to our use of cookies.