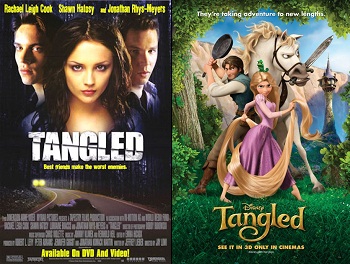 This is when several works share a name. They could even be different media. And yet they're completely unrelated.

Essentially, Name's the Same when applied to works. When the names are slightly different, it might be a case of Translation Matchmaking.

This trope is so prevalent that The Other Wiki developed the Disambiguation system to address this and similar issues (like common surnames) -- which we use as well. As we create disambiguation pages for these, we'll take them off this list; see Category:Ambiguity Index for the list of existing disambiguation pages.

NO MORE ENTRIES HERE, PLEASE - go ahead and create the disambiguation pages directly, and cut out the middleman.

Though this may be a result of translation laziness. For example, Sun Tzu's one is actually "Sun Tzu's Methods of War" in Chinese and Mao's is On War (which is itself not to be confused with Clausewitz's "On War").

Retrieved from "https://allthetropes.org/w/index.php?title=Similarly_Named_Works&oldid=1922929"
Categories:
Cookies help us deliver our services. By using our services, you agree to our use of cookies.