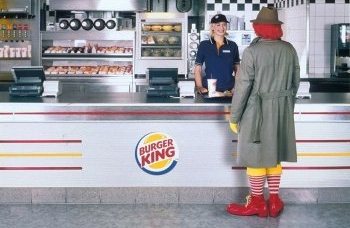 "Hello, I wanna see if this place's burgers are better than mine. Not that I look familiar or anything."

"Looked like sort of a big turtle... in a trenchcoat."

An "evil" character, or otherwise out-of-the-ordinary character, can always be identified (by the observant audience anyway) by the fact that he wears a concealing trenchcoat, fedora and occasionally dark glasses that are in no way seen as suspicious by any passers-by.

Not to be confused with Badass Longcoat or Trenchcoat Brigade. Lawmen or vigilantes wearing these do not count unless they are deliberately trying to avoid notice.

This one started out as Truth in Television. From the late 1930s to late 1950s, a trenchcoat and fedora were the standard outerwear for a man who was neither upper-class nor extreme lower-class. Consequently, they were the natural choice for spies, detectives and anyone wanting to blend in with the added bonus of easily concealing weapons. But as this style fell out of fashion with the general public, it came to be exclusively associated with said spies and detectives, whose continued use of this fashion would make them more conspicuous if anyone were paying attention.

Thus, whether this is perfectly plausible disguise or a Paper-Thin Disguise depends largely on the medium and the setting of the story. And the weather.

Very useful when two kids stand on top of each other's shoulders and pretend to be an adult.

With all the concern with terrorists and flashers, this is likely on its way to becoming a Dead Horse Trope.

Modern version of Black Cloak and In the Hood. Variant of Coat, Hat, Mask.

The Other Wiki also explored this trope in its own page.

Examples of Conspicuous Trenchcoat include:

"How come in movies no one can ever see past a trenchcoat and a fedora hat? Is it like Clark Kent's hypnotizing glasses or something? Do they just make people stupider?

"The ducks in St James's Park are so used to being fed bread by secret agents meeting clandestinely that they have developed their own Pavlovian reaction. Put a St James's Park duck in a laboratory cage and show it a picture of two men -- one usually wearing a coat with a fur collar, the other something sombre with a scarf -- and it'll look up expectantly."

Heather: (amused) Leonard, uh... what are you dressed as?!
Suki: (snickering) Yeah, it's a little early for Halloween.
Zoe: (with round eyes and clearly struggling against Jaw Drop reflex) Definitely.

Bubbles: I had been... considering a possibility that an outer garment might make me less threatening to the general populace.
[...]
Bubbles: You are maintaining a careful neutrality about my appearance. This suggests that I look ridiculous.