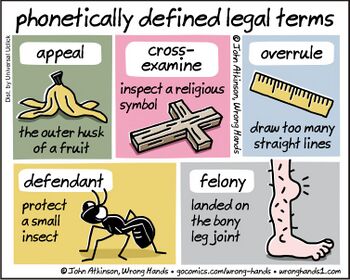 The following "master list" of errors originally came from a (still-incomplete) document of advice for amateur writers which Troper-and-paid-author Looney Toons has been composing on and off since early 2007. (At some point in 2012, Looney Toons spun off the error list into its own document, but feel free to check out the guide anyway.)

While it is in no way definitive or exhaustive, it is rather extensive and ever-so-faintly snarky in places. It is more-or-less organized in alphabetical order by the erroneous word or phrase, although in some cases two or more terms may turn out to be interchangeably misused for each other, in which case the "key" entry is pretty much arbitrarily selected.

Additional examples are always welcome, and will probably be stolen for Looney Toons' master copy. New entries should, of course, be inserted into the list alphabetically by the erroneous word. If both/all the words are mutually misused for each other, pick your favorite to alphabetize by -- but make sure that someone else didn't pick the other one to alphabetize it under already.

A term that will be found frequently in the following, but which may not be immediately familiar, is "eggcorn". "Eggcorns" are words or phrases that a person has only ever heard and never seen written, which when that person needs to write them down get written the way they sound to him. The term comes from the transcription someone once made of the word "acorn", which they had somehow gotten through their life without once seeing (or recognizing) in print. The eggcorn is the half-sibling of the Mondegreen.

An excellent guide to known eggcorns can be found here.

Related to the eggcorn is "eye dialect". This is a term for the writer's device of spelling words as they sound in order to give a sense of a speaker with a foreign accent, an odd dialect, or poor education. For example, using "gonna" or "gunna" for "going to". In general, this is a deliberate stylistic choice made by a writer, but on this page it's used also to reflect a variety of eggcorn that is caused by poor literacy skills—the key example would be writing the contraction "'ve" as " of" (as in "could of", "would of") out of simple incomprehension that the words in question are a contraction.

As a final note, the original core set of examples here were primarily collected from Fan Fics (mostly for Anime, at least at first). As a result, you will occasionally find specific references (though not links) to the fics in question; this is to allow the reader the opportunity to view the errors in their native environment, should they so choose.

No relation to Boo-Boo Bear, Bobo Bombardment, or any List of Big Booboos.

Retrieved from "https://allthetropes.org/w/index.php?title=The_Big_List_of_Booboos_and_Blunders&oldid=1928069"
Categories:
Cookies help us deliver our services. By using our services, you agree to our use of cookies.