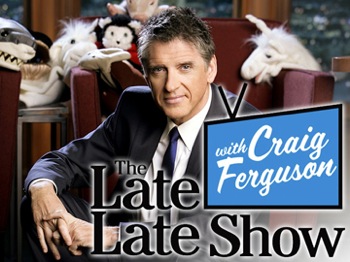 It's a great day for America, everybody!

A late-night television show on CBS, directly following David Letterman's Late Show. Previous hosts include Tom Snyder (1995-98) and Craig Kilborn (1999-2004). The current host is Craig Ferguson (2005-present), who won a 2009 Peabody Award for Excellence in Electronic Media for the episode A Night with Archbishop Desmond Tutu.

Rod: You know what, Kilborn? Your interviewing is piss poor. Screw you, just do the news!

Craig: Craig, why are you insulting people from Hollywood?

Craig: Because nobody around here won the Peabody Award!

Geoff (Matthew McConaughey voice): What can I say? Sometimes my current flows the other way.

Sid: And I was like "well 'ow come Geoff Peterson can do it but I can't do--I mean, Craig Ferguson can't do it?"

Craig: And I'll be watching the American Idol final tonight...or I already did because we're live. Congratulations, (covers mouth with hand and in a slightly deeper voice) winner!

Craig: That was AWESOME!

Geoff: Is that code?

"Are you ready, film students??? It Was His Sled! Hahaha! Now you don't have to sit through THREE HOURS!"