Everything About Fiction You Never Wanted to Know.
< Axis Powers Hetalia
Jump to navigation Jump to search 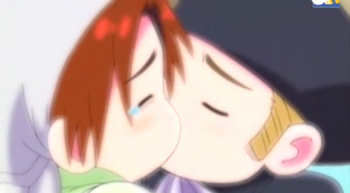 Axis Powers Hetalia has a lot of Ho Yay between the Moe Anthropomorphisms of countries, though not as overwhelming or excessive as certain fans make it to be. There are at least two male/male almost-Official Couples (Sweden/Finland and Germany/North Italy, if you ask), not to mention two guys who did have sex in canon (Greece and Japan's "private lesson") and all the Ship Tease between several others, including America/England, and the male Meganekko who's married to a Hot Amazon who likes watching other men hit on him...

Sub
Grandpa Rome: In any case, what a lonely guy you are. You can't even invite a girl to your bed?
Germany: [blue faced & head in hand] Shut up!
Grandpa Rome: [smiling, eyes closed] When I was around your age, I was surrounded by pretty women in bed. You have that experience too, right?
Germany: I don't, you dirty old man!
Granpa Rome: Oh? You like boys or older women? That was trendy in Neapolis at one time. Hmm, I should've experienced it at least once.

Dub
Grandpa Rome: So tell me, what kind of a man does not have a woman in bed with him every night?
Germany: [blue faced & head in hand] *muttering*
Grandpa Rome: [smiling, eyes closed] When I was your age I had a plethora of lovely ladies around me. [Eyes open] Oh are you not into gir-
Germany: [fist raised] I will punch you in ze throat!
Grandpa Rome: Come on now, don't be so sensitive, no one here is judging you. There's nothing wrong with playing for another team and everyone likes to experiment a little, except me of course.

Germany: Hey Austria, what type of relationship do you call it when you see them everyday, and they hug and kiss you, and go in the bath with you, and sleep in the same bed with you (while they're naked)?
Austria: [blushing] ...Don't say such vulgar things!
Germany: [despaired] Vulgar....?!
Austria: Oh, you meant him...

Germany: It-it can't be... I can't believe he became one with the stars after being so trivial... [Goes on knees] He may have been a bit strange and useless... But he had his heart in the right place. If I knew this is going to happen, I would've treated him more gently... [starts sobbing] Italy... ITALLLYYYY!
Italy: [hanging from a tree] G-Germany...

Germany: Er, we don't have to kiss, do we?
Italy: Nope! Unless you want to.

Italy: Eh? But I'm handsome enough as I am now, or not?
Germany: Think about how you'll be even more handsome and open them!
Italy: Got it! *opens his eyes* Like this?
[Italy sits there with big wide eyes. Germany looks disturbed, and ends up slapping his hand over Italy's face]
Cuba: (laughing) What is it? Was his face so preposterous?
Germany: Ah...how to call this...maybe 'too limpid' would be fitting.

Russia: What? You too. I need my little Lithuania to come with me to Germany.

America: Dude! No way! Hang in there! Please! You can't just die! You still owe me a crap ton of money!
Britain/England: America...listen to me. We've spent too much of our time fighting. And I want you to know...I don't hate you. I know it must have seemed that way. The truth is...I'm i--*grim reaper's hand cuts him off*

Britain/England: Hey America, I found some ice cream in the supplies. I won't touch the stuff, but I thought you might like it.
America: Whoa, ICE CREAM?! Dude, I'm so coming there to hug you!

Lithuania: R-Russia! Everyone was pretending not to hear anything!
England: W-what? Everyone's awake, after all?
France: That's because you were having a lover's quarrel here.
England: Don't say it was a lover's quarrel!

Japan: Well, it's not like we were peeping and such...

England: That's why! The alien and friends over there, just shut up! You have been trying to irritate me since just now.
America: Even if you said that, the truth is you just wanted to sleep together in the same room in the same way we did in the past, right?
Tony: Love me bubu. Kiss me bubu.

America: What is it, England? Haven't you already left?
England: N-no, Italy found me and dragged me back here. If you don't want me here, I'll leave.
America: That's not true at all! Please stay.
England: Well, I would like to hear Austria playing the piano.

Japan: "I want to form an alliance with YOU at all costs, Mr. England."
England: "What...? Japan...Is that true? I-I see...I want that too."
Japan: "*breathlessly* Mr. England..."
Then zooming in on their soft, sweet smiles, wind blowing through their hair
And then England switches over into classic "tsundere mode"...

Denmark: Whoaing us or somethin'!]] Is that what you'd call it? Well, let's get along from now on, ok?!

There are writings left behind by some of Rome's distinguished people praising blond hair like Mr. Germania has.
Romans with black hair, dark skin, and black eyes regarded the blond appearances as mysterious.

Belgium: When I look back, I feel kinda bad that I didn't try a little harder.
Ukraine: Belgium did try hard! I wonder if I had a little too much time in front of the camera.

"Let's go to a photo studio, put on some make up
Wear qipao and choose a pose together
When you don't have any confidence
Make those worries go poi poi poi
Look, you're cuter now! (You're sparkling!)"