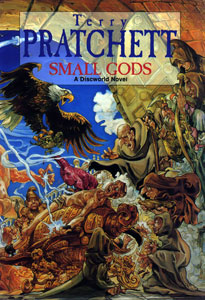 The 13th Discworld novel and a standalone, although it uses some characters and locations from Pyramids and its events influence later works.

Omnia is a theocratic empire, somewhere between Khomeini's Iran and Inquisition-era Spain. Ruled by the Cenobiarch and his church military, the religion of Omnianism - the worship of the Great God ("holy horns") Om - dominates all aspects of life. At the bottom of the pile is the young novice Brutha, big and slow but with a Photographic Memory. He finds a tortoise, dropped by an eagle in an unsuccessful attempt to smash its shell. A talking tortoise. It claims to be Om himself, reduced to this weak state because on Discworld the gods need belief to survive and everyone in Omnia, save the simple Brutha, is believing in and fearing the structure of the church rather than Om himself.

Small Gods is particularly renowned for its Zelda-like havoc-wreaking with the always-spotty Discworld timeline due to the appearance of Pyramids characters in the "young Brutha" segments yet the fact that the Omnianism that appears in later books is the more tolerant post-Brutha version. This was eventually explained in Thief of Time as being due to the Timey-Wimey Ball. It's also been said by Pratchett that he was here able to more fully explore ideas he first introduced in Pyramids.