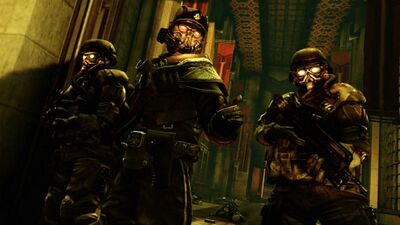 The last guy he pointed at died.

Killzone is a series of first-person shooters exclusive to the PlayStation consoles, developed by Netherlands-based Guerrilla Games.

The first game is set in an era of space colonization where the Helghast Empire has recovered from its defeat in the First Helghan War and launched a blitzkrieg against the outer Interplanetary Strategic Alliance (I.S.A.) colony planet Vekta. Vekta's orbital Strategic Defense platforms failed during the initial assault, allowing the Helghast to land swarms of soldiers onto the surface and making it all the more difficult for the outnumbered ISA forces.

You take the role of either Jan Templar, Shadow Marshall Luger, Rico Velasquez or Gregor Hakha to stop the Helghast from taking over, as well as uncover the plot that threatens to destroy the ISA from within.

About two months after the events of the first game, the Helghast have been dealt a hefty blow, but the war is far from over. The enemy still controls large parts of the planet Vekta, and though the ISA armies are fighting hard, they are losing ground. The rules of war have been cast aside with the sadistic Helghast General, Armin Metrac, employed by the Helghast Emperor Scolar Visari to use brutal measures in order to seize the initiative and strengthen his position further. Returning as Jan Templar, players will be sent on a covert operation to save hostages captured by Metrac, while ISA troops continue the fight for liberty.

Two years after the Helghast assault on Vekta, the ISA has launched an assault on the enemy's homeworld of Helghan. The ISA goal is to capture the Helghast leader, Scolar Visari, and bring the Helghast war machine to a halt. Players assume the role of Sergeant Tomas "Sev" Sevchenko, a battle-hardened veteran of the special forces unit Alpha Team, who go on a mission to take out the Helghast threat.

During the invasion of Helghan, Sev's unit is deployed behind enemy lines to assist the main invasion force. Tasked with securing the enemy capital of Pyrrhus, the team quickly discovers that the Helghast are a more formidable enemy on their home planet. Not only have they adjusted to Helghan's hostile conditions, they have also harnessed the power of the freakish lightning storms that always occur on Helghan which they can now use against the ISA. A barren, unforgiving world, Helghan provides a ready defense with thick, acidic air, dust clouds, violent lightning storms and electric spiders. Sev discovers his squad is not just fighting enemy forces; their fiercest opponent may be the planet itself.

Killzone 3 begins exactly where the previous game left off, and is spent surviving long enough to find a way off of the damn planet. While Killzone: Shadow Fall takes place on Vekta 20-30 years after those events, where the ISA and the surviving, relocated Helghast are forced in a tense co-existence following the seeming destruction of Helghan itself at the end of Killzone 3.

So far the series includes:

Tropes used in Killzone include:
Retrieved from "https://allthetropes.org/w/index.php?title=Killzone&oldid=1611998"
Categories:
Cookies help us deliver our services. By using our services, you agree to our use of cookies.