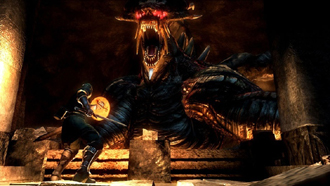 Demon's Souls is a Play Station 3 game made by From Software and published by Atlus.

The game is set in the Kingdom of Boletaria, which was led to great prosperity by King Allant XII with the use of the power of souls, until it was beset by a strange colorless fog that isolated it from the rest of the world and brought soul-hungry demons with it.

After the world was let known of Boletaria's plight, legend spread of the chaos within the kingdom wreaked upon it by a beast from the Nexus and of the demons that grew ever more powerful with each soul they devoured. Many people went to Boletaria, either to save it from its plight or lured by the prospect of the power of souls, but all were lost in its chaos.

You are one such person, like many others now dead and trapped in the fog with your soul bound to the Nexus. From there, your journey begins...

Infamous for being extremely hard due to the game playing with Trial and Error Gameplay. For this, it has gained wide praise, as the game manages to be hard but fair.

In reality, it's hardly Nintendo Hard -- rather, it's Difficult but Awesome in game form, as it encourages you to learn from your mistakes to become an experienced demon slayer. Running headfirst into battle swinging the sword like a madman hoping to hit something will only get you killed, and again, and again... and again.

The game includes a very unusual online multiplayer mode that avoids direct interaction almost entirely. You will often see ghostly forms of other players fading in and out of your game; you are unable to interact with them in any way, but it adds even more to the atmosphere of the game. When other players die in a dungeon, they leave behind a bloodstain which shows a replay (in ghost form) of how they died or a message that can contain a helpful tip. The ghost-replay can be helpful in showing you how not to die just ahead like that other guy. Useful tips can be rewarded, which gives the player who left them a temporary power boost; however, this doesn't stop some players from giving deliberately bad advice For the Evulz. Under certain conditions, you can receive direct help by sending out a summons that will randomly pull another player into your world, while others are out to kill you for the Souls that you hold and can enter your world uninvited. Fun times.

Tropes used in Demon's Souls include:
Retrieved from "https://allthetropes.org/w/index.php?title=Demon%27s_Souls&oldid=1845052"
Categories: