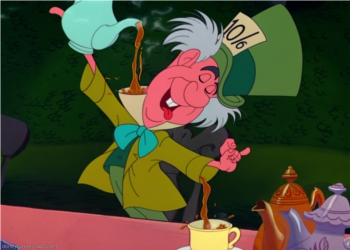 For a very long time, TV writers seemed to think that one of the universal signs of mental illness was a total inability to perceive one's self as acting oddly. It's tempting to have a mentally ill person utter such classic Mad Scientist lines as, "They Called Me Mad, but I'm not mad, they're the ones that are mad!" And certainly, the near sociopathically quirky characters you find on the average Sitcom seem to think themselves perfectly ordinary. However, in the real world, some, but by no means all deeply disturbed individuals are like this.

Fortunately, this is not always the case. Few characters can be more fun than the Self-Aware Loon. He's crazy and he knows it. And he's making the best of it.

He may be a Talkative Loon most of the time, but he has his lucid moments, and may even consider his episodes to be a welcome respite from normalcy.

Consequentially, he often gets to say clever lines like, "Well, I think it's a good idea, but then, I'm crazy," "I'm crazy, but I'm not stupid," "I may be insane, but you're crazy" or "Oh yes, I'm insane. And you're stuck here with me."

Mostly characters who have become unhinged by an exceptional ordeal; rarely results from an organic disorder. Often a facet of the Waif Prophet or the Rabid Cop; and frequently a major character component of the Shell-Shocked Veteran and Special Forces military types.

Usually a fun character, and a little cartoonish, though it can also be played tragically (this is how it usually goes when The Mad Hatter's illness is organic in origin) as a character is overcome by the knowledge that he is losing his mind and is powerless to stop it.

Probably something of a convenience for the writer, as, just as is true of race and handicap, when it's the victim making light of their condition, it doesn't come off quite as insensitive.

Some may find it insulting to the families of those who are actually mentally ill. On the other hand, perhaps they can take some solace in a depiction of mild mental illness as something that can be coped with.

Archetype is named for the character from Alice in Wonderland, who, like most of Wonderland's residents, knew just how crazy he was, and had decided to just sit back and enjoy it. Carroll's Mad Hatter is in turn a reference to the tendency of Victorian era hatters to go mad. "As mad as a hatter" was even a common phrase at the time. The actual cause of the phenomena was the presence of mercury in the solution used by hatters to shape and form the felt. The hatter would inhale and ingest trace amount of mercury during his work and eventually suffer from mercury poisoning, leading to dementia and death.

See also the Reluctant Psycho, who has mental problems. Compare Obfuscating Insanity, when the character pretends to be mad.

Examples of The Mad Hatter include:

Retrieved from "https://allthetropes.org/w/index.php?title=The_Mad_Hatter&oldid=1839703"
Categories:
Cookies help us deliver our services. By using our services, you agree to our use of cookies.