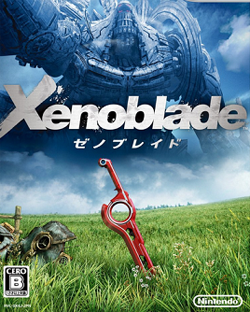 In the world of Xenoblade, two country-sized gods called the Bionis and the Mechonis fought an endless war against one another until only their lifeless corpses remained. Life flourished on the surface of these titans, giving birth to the human-like Homs on Bionis and the machine-like Mechon on Mechonis.

Peace would last until the Mechon launched an invasion, attempting to wipe out all life upon Bionis. With the power of a legendary sword known as the Monado, the only thing capable of piercing Mechon armour, the invasion was halted and peace regained for a time. That is, until one year later when the Mechon returned in even greater numbers than before.

The story follows Shulk, a young Homs male who becomes the new wielder of the Monado. He chooses to use the power of the blade to seek revenge against those who destroyed his village.

It was released in Japan on June 10, 2010. Finally, it was released in Europe on August 19th, 2011 under the name Xenoblade Chronicles, translated to (British) English, French, German, Spanish and Italian. Its most recent release is in America. See the European trailer here.

On December 2nd, 2011, Nintendo of America announced that the game would be reaching North America in April of 2012. With the UK dub included! And the fandom exploded. And as of 2015, it has been ported over to the New 3DS as one of its first titles, has a spiritual sequel on the way, and Shulk has even earned a spot as a playable character in Super Smash Bros.! Needless to say, Xenoblade has certainly been picking up popularity.

This game, along with The Last Story and Pandora's Tower, both of which were also released in Europe during 2012, became part of a massive fan campaign called Operation Rainfall in an effort to persuade Nintendo of America to bring all three games stateside. It worked, albeit not exactly as they intended, since Game Stop had to step in. More details can be found on The Other Wiki here.

Tropes used in Xenoblade Chronicles include: