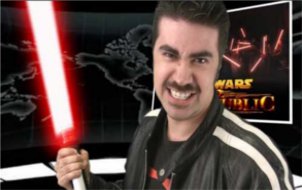 ANGRY JOE! ANGRY JOE IS THERE!

A gamer with an off-the-wall reviewing style and a mite too much energy, "Angry" Joe Vargas got his start by submitting a video review for Army of Two giving constructive criticism that was surprisingly what the developers really wanted to hear. Angry Joe now does reviews and other videos on his own website and is a major contributor for That Guy With The Glasses.

Back in November 2010, he and the other video games segments of TGWTG were spun off onto their own separate website, Blistered Thumbs, with Joe as the site's executive leader. Now, however, he has left Blistered Thumbs to create his own site, The Angry Joe Show, located here. In addition, he is a member of The Game Station.

A list of stuff from his show can be found here.

Tropes used in The Angry Joe Show include:

Retrieved from "https://allthetropes.org/w/index.php?title=The_Angry_Joe_Show&oldid=1747779"
Categories:
Cookies help us deliver our services. By using our services, you agree to our use of cookies.