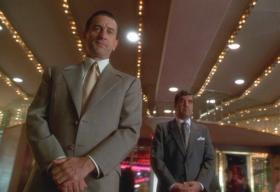 A 1995 film starring Robert De Niro as Sam "Ace" Rothstein, Joe Pesci as Nicky Santoro, and Sharon Stone, who earned an Academy Award nomination for her role as Ginger.

Until the early 1980s, The Mafia had a huge stake in Las Vegas. But while they ran the casinos, they didn't run the town. They had to use fronts to get their men in to run everything. One of these men was Frank "Lefty" Rosenthal, who unofficially ran three casinos for the bosses in Chicago. His work, and involvement with the fall of organized crime in Vegas, was the basis for this film.

The film is loosely based on the years between when he started running the casinos, and when he play at mobile casino. Although the film isn't an exact account of what happened in that time (a lot of that is more Artistic License than Did Not Do the Research), it does provide a good overview of it.

It also got a lot of criticism for being, basically, Goodfellas IN VEGAS!, largely due to Martin Scorsese directing it the same way, Nicholas Pileggi adapting again one of his books, and for some characters having a really close resemblance to similar characters in the last movie - though, in that respect, both men Pesci played really existed and acted even worse in real life. Being both significantly longer and more slowly paced didn't help either.

But on its own, it's definitely not bad. Just be prepared for some Padding at points.

For the trope about a gambling establishment, see The Casino.
Tropes used in Casino include:
Retrieved from "https://allthetropes.org/w/index.php?title=Casino&oldid=1969036"
Categories:
Cookies help us deliver our services. By using our services, you agree to our use of cookies.