You Are Better Than You Think You Are 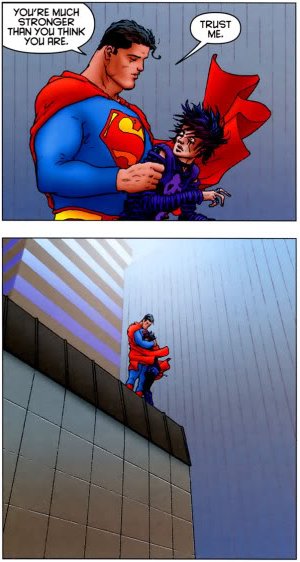 You should trust him. After all, he's Superman.

Sometimes a character feels like they are worthless, and does not belong somewhere they value and is fit only to be a villain, no matter how much the idea frightens him.

Eventually, their friends or mentors learn what is troubling him and confront him saying something along the lines of, "Don't be so hard on yourself. You are better than you think you are, and I'm going to prove it."

When that challenger proves it with irrefutable evidence, the hero ends up feeling much better with the knowledge that someone he deeply respects believes in him more than he did himself.

The Power of Friendship and The Power of Trust may come into play. Sometimes, though, you'd need a Magic Feather.

Similarly, a Naive Newcomer and Cowardly Lion may have a sager character explain that fear is not proof that they are cowards; only the Fearless Fool really feels no fear.

For the opposite, see Heel Realization. When a character has to be constantly reminded of this, they usually suffer from Heroic Self-Deprecation. Compare You Are Not Alone. If handled well, such a situation can easily become a Crowning Moment of Heartwarming.

Examples of You Are Better Than You Think You Are include:

Retrieved from "https://allthetropes.org/w/index.php?title=You_Are_Better_Than_You_Think_You_Are&oldid=1881765"
Categories:
Cookies help us deliver our services. By using our services, you agree to our use of cookies.