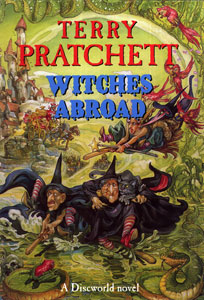 The 12th Discworld novel and the second or third book in the "witches" theme (depending on if you count Equal Rites). The title is a pune, or play on words, on the Shakespearean phrase 'witches abroad' (i.e., out on the prowl in archaic language) whereas here it's used in the modern sense - they're going to a foreign country.

Quoting the back cover blurb:

Tropes used in Witches Abroad include:
Retrieved from "https://allthetropes.org/w/index.php?title=Discworld/Witches_Abroad&oldid=1796245"
Categories: