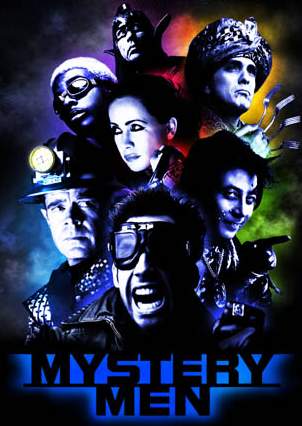 The (very loose) film adaptation of an offshoot of the Flaming Carrot comics, Mystery Men tells the story of a bunch of loser superheroes, constantly overshadowed by the big-name, big-ego Captain Amazing (Greg Kinnear). While the Trio of Blue Raja (Hank Azaria), Mr. Furious (Ben Stiller) and The Shoveler (William H Macy) try desperately to get themselves taken seriously, Captain Amazing laments the lack of decent villains for him to fight.

But after Super Villain Casanova Frankenstein (Geoffrey Rush) gets released from a mental institution -- thanks to the machinations of Captain Amazing himself, who is rapidly losing his corporate sponsors due to his crime-free city -- it's no time at all before he's gathered the local gang leaders (including Eddie Izzard), built himself a super weapon, the Psycho-Fraculator, and captured Amazing.

The not- exactly- kinda- eponymous characters are left needing to recruit Champion City's other underdog supers, including The Bowler (Janeane Garofalo), The Spleen (Paul Reubens) and Invisible Boy (Kel Mitchell), train under the enigmatic tutelage of the Sphinx (Wes Studi), using weapons created by Mad Scientist/Gadgeteer Genius Dr. Heller (Tom Waits) in order to save the day.

Mystery Men is an Affectionate Parody of superheroes, with bizarre powers and an odd look at (and much Lampshade Hanging on) various conventions of the Superhero Genre, and how they would fit into normal life.

Tropes used in Mystery Men include:
Retrieved from "https://allthetropes.org/w/index.php?title=Mystery_Men&oldid=1963112"
Categories:
Cookies help us deliver our services. By using our services, you agree to our use of cookies.