A Handful for an Eye

Everything About Fiction You Never Wanted to Know.
(Redirected from A Handful for An Eye)
Jump to navigation Jump to search 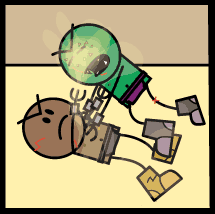 This is a simple yet effective method of improving your odds of victory. A character with no compunctions about cheating, usually the villain, flings a handful of something into the eyes of their combatant for a temporary combat advantage.

In most situations this will be a handful of loose dirt or sand grabbed from the ground, but in some instances more dangerous and painful materials can be used to attempt a permanent blinding.

Also see Go for the Eye, Eye Poke, and Blinded by the Light.

Examples of A Handful for an Eye include: