Everything About Fiction You Never Wanted to Know.
(Redirected from A Little Princess Sara)
Jump to navigation Jump to search 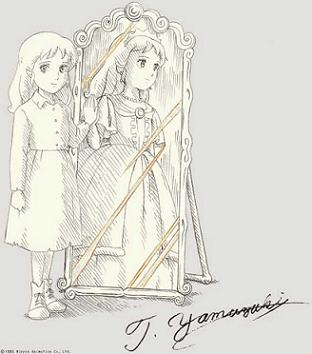 Sara, as others see her, and as she remains on the inside.

Princess Sarah, directed by Fumio Kurokawa, is an Anime adaptation of Frances Hodgson Burnett's classic children's novel A Little Princess. Though remarkably faithful to the original text, this series is an excellent example of Adaptation Expansion, expanding the novel to 46 episodes of 22 minutes each, and adding new characters and situations.

The story remains fundamentally the same: Sara Crewe, a little girl of almost nine, is the daughter of a wealthy English widower living in India. To complete her education, she is sent to a "Select Seminary For Young Ladies" in London, run by the forbidding Miss Minchin and her kind but ineffectual sister, Amelia. Though Miss Minchin takes a dislike to her, Sara wins over most of the pupils with her kindness and her storytelling skills. Among the most important friends she makes are the kind-hearted class dunce, Ermengarde, the scullery maid, Becky, and the school's youngest pupil, Lottie (aged 4), who has also lost her mother and whom Sara unofficially "adopts". She is also a gifted pupil - especially in French, her late mother's language - which earns her the admiration of the Mayor's wife during a school inspection. The quintessential Alpha Bitch, Lavinia, resents her wealth and popularity, and this gets worse when Sara learns that her father has invested in diamond mines, and replaces Lavinia as the class representative.

However, on her ninth birthday, Sara receives news that changes everything...: the diamond mines turned out to be worthless, and Captain Crewe has died penniless of "jungle fever". Left a pauper, Sara is made to work as a servant, forbidden from associating with her former classmates, and ill-treated almost beyond endurance by Miss Minchin and Lavinia. She tries her best to remain strong and stay hopeful, even in the face of enormous hardships, but she's only human, after all...

After numerous glimmers of hope that all end up miserably, she is finally delivered through the agency of fate and a kindly neighbour, and reclaims her former position as the school's beloved "Diamond Princess".

This series was the 1985 (11th) installment of Nippon Animation's World Masterpiece Theater series, whose specialty was the adaptation of various well- and not-so-well-known classics of children's literature into Anime series. Though relatively unknown in English-speaking countries, it was wildly popular in France and several other European countries, as well as in the Philippines and Saudi Arabia. According to The Other Wiki, one poll of Japanese viewers places it among the 100 best Japanese animated series.

In 2009, a drama of 10 episodes was made, starring Shida Mirai as Seira, Tanabe Seiichi as a French teacher and Higuchi Kanako as the Japanese counterpart to Miss Minchin, Mimura Chieko. This version took more liberties with the original material than the anime, making Sara/Seira an adolescent, and giving her a love interest.

A lot of the tropes in this series are already covered at A Little Princess. Tropes exclusive to Princess Sarah are listed below.

Tropes used in Princess Sarah include:

The 2009 drama has examples of