The King of Fighters/Characters/The Tales of Ash

Everything About Fiction You Never Wanted to Know.
< The King of Fighters‎ | Characters
Jump to navigation Jump to search

Characters are listed in alphabetical order of last names. It should be noted that all the Chinese and Korean character names are rendered in the Western style (given name-surname rather than surname-given name).

References, such as Mythology Gags, Continuity Nods, No Celebrities Were Harmed, Expy, Shout-Out, Captain Ersatz and the like, should go in this page. 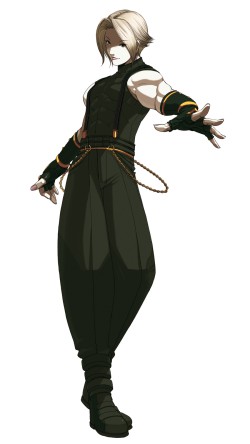 "So it's defeat for you, is it? Some day I must meet a similar fate."

As his last name suggests, he is Rugal Bernstein's son, and has inherited his father's wealth and fighting style. Unlike his evil father, he is a good person who exhibits sportsmanship and honor. At the behest of his sister Rose, he challenged the champions of the 2003 tournament in the SkyNoah, he and his younger sister's flying fortress. He entered the next tournament as a single entry, and was under investigation by Heidern until he assured him he was a different person from his father. 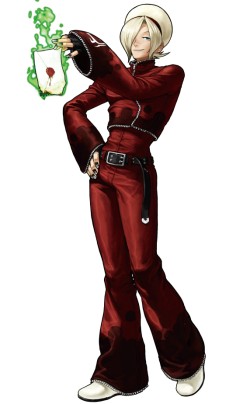 "Don't play your trump card until the end... The very end!"

Current protagonist of the series, and the focus of the Tales of Ash saga. His past and motives are currently a mystery, save his connection to Elisabeth (whom he affectionately nicknames "Betty", much to her annoyance). Like Kyo and Iori, he wields flames, although his are green, and it's unknown how he obtained them. He entered the tournament in order to steal the Sacred Treasures (and powers) of Kyo, Iori and Chizuru.

"Crushed your spine, and your silly pride I hope!"

A practitioner of an assassination fighting style. Gato is searching for a mysterious man who is connected to his past. In Mark of the Wolves, he enters the tournament believing that Kain knows about the man he's after, and sure enough, that man appears and saves Kain from the collapsing mansion. The man is revealed to be Gato's father, who drove his mother to death and vanished without a trace, but not before brutally maiming Gato and leaving him for dead. He encounters Hotaru Futaba, who believes him to be her older brother, but Gato continually denies this for some reason. In 2003, he is hired by Geese Howard to investigate the events going on in the tournament, and in XI, forms a new Garou team along with B. Jenet and Tizoc.

The late elder twin sister of Chizuru, and one of the two heiresses of the Yata Clan alongside her sister. Of the two, Maki is actually the more skilled combatant. Years before the King of Fighters tournaments, Maki was killed by Goenitz, the leader of the Orochi Hakkesshu, to weaken the seal of Orochi. The Maki who appears in 2003 is nothing more than an illusionary product of Chizuru's memories created while Chizuru was under the influence of Botan. While serious about their duty to protect the seal, she and Chizuru only serve to do just the opposite. 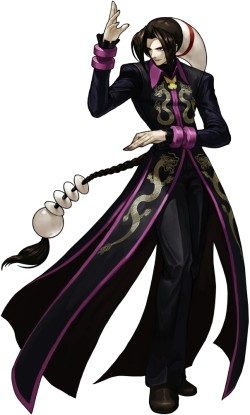 "Those who live in darkness are not ruled by it. Those drawn by the shadow do not live by it."

Duo Lon is also a member of the Hizoku clan, and one of Ron's sons. He is also searching for his father for his betrayal of the clan. He teams up with Ash Crimson for a time, but later joins Elisabeth Blanctorche's team, along with Benimaru Nikaido, after noticing that Ash was manipulating his teammates. 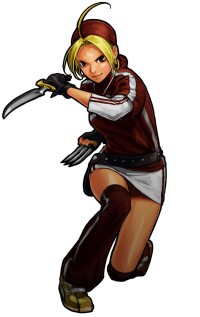 An adversary to the Kyokugen school of Karate (specifically Yuri). Aside from that, no one knows much about her. She may not be what she seems... 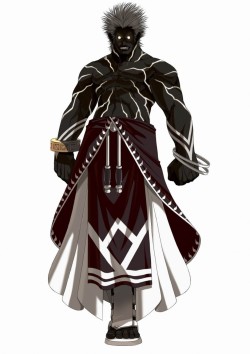 "How does it feel, becoming a living statue?"

An earth elemental, and one of the members of Those From The Distant Land. Mukai, unlike Magaki, is more cautious when fighting humans. After his defeat, he vanishes.

A brawler from Shanghai who joins Ash Crimson solely to fight strong opponents. After Duo Lon leaves the team in 2003, Shen sticks around for XI, teaming with Oswald. However, Ash pits the two men against each other, tricking Oswald into believing Shen was someone standing in his way. After this, he grows sick of being jerked around by Ash, joining up with Elisabeth and Duo Lon for the XIII tournament. 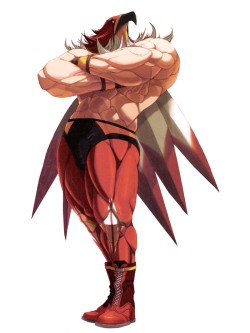 "Tizoc, this wall of muscle, is invincible to the fists of evil!"

A professional luchador wrestler who fights for charity. After a while, however, he starts thinking about retirement. He recovers, and enters the King of Fighters 2003 tournament with Terry and Joe to promote his entrance into the American wrestling circuit. In XI, he joins Jenet and Gato's team.

The King of Fighters XI 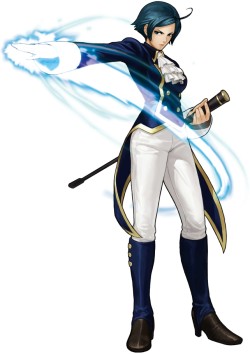 "Showing calm in the eye of the storm. That's the mark of a true fighter, no?"

A former associate of Ash Crimson who is out to prevent whatever he's planning, and the heir to the Blanctorche family. She uses light-based attacks and fights with a riding crop. Hates to be called "Betty", a trait which Ash loves to exploit. 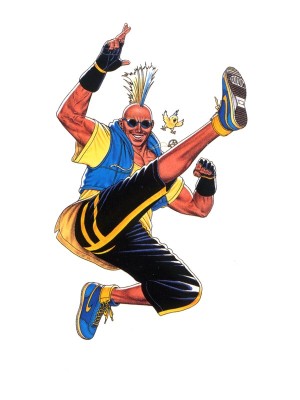 A friend of Terry Bogard who's been around since the first installment of Fatal Fury, but only made his playable appearance in King of Fighters in The King of Fighters XI. He's a notable DJ in Southtown. 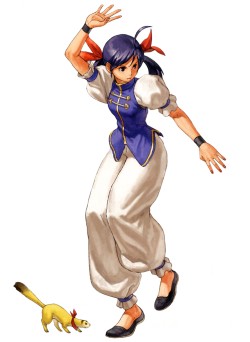 "I won't lose! I've got someone to protect too!"

Originally making her debut in Garou: Mark of the Wolves, Hotaru is the daughter of a family of martial artists. Unfortunately, she isn't fond of violence. When her mother dies, both her father and older brother simultaneously disappear. Hotaru enters Kain R. Heinlen's King of Fighters: Maximum Mayhem tournament after hearing rumors that her brother might be there, fervently hoping to reconnect with her family. She appears in XI for a similar reason. 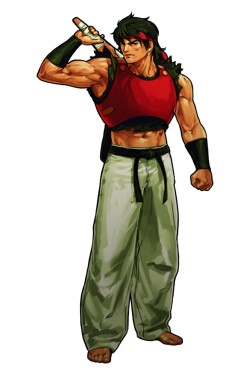 The Hero of Savage Reign, Hayate is an old-fashioned warrior and the sole practitioner of his self-taught combat form Fu'un Ken. He trains non-stop, vigorously hoping to become a true master and show the world the power of his fighting style.

A Rich Bitch who was ported over from Mark of the Wolves, along with Gato and Tizoc, much to the delight of fans. B. Jenet is the captain of a group of pirates calling themselves the Lilien Knights. Although she's rich herself, Jenet doesn't like mooching off of her parents, so she pretty much founded the Knights out of boredom. She enters the King of Fighters tournament for the prize money. 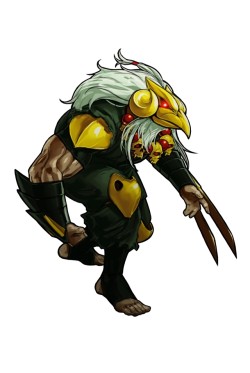 Leader of the terrorist group known as Jaguar, Jyazu is the True Final Boss of Kizuna Encounter, the sequel to Savage Reign. An enigma, not much is known about his past or motives. To date, he is one of two people to have ever bested King Leo, the tyrannical host of the Battle of the Beast God Tournament. 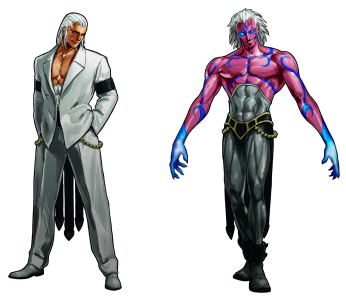 "You craved a strong opponent, right? You can die satisfied then."

One of the members of Those From The Distant Land. Unlike Mukai, Magaki shows no caution when fighting humans, considering them to be insignificant trash. He traps Shion in another dimension for his failure, and fights the winning team. After his defeat, he tries to escape, but he ends up impaled by Shion's spear and dies. His body ends up in the jurisdiction of Heidern, but two children manage to take his body back. 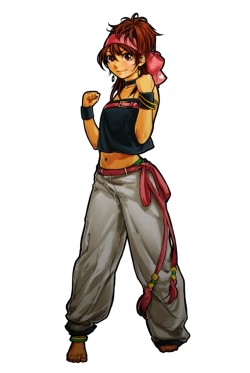 The newest addition to the Psycho Soldiers. She uses Capoeira as a fighting style.

"Karnoffel would be satisfied with me. Your hand, sir?"

Ash's newest partner in XI. Oswald is a suave Irish assassin who uses razor-sharp cards to attack his opponents. Likewise, he has an expertise in playing Karnoffel, a form of poker. Coincidentally, it's how he joined Ash's team: by a game of poker. He is searching for a rare drug known as the "Dragon Pill", suggesting that Oswald may have a terminal disease. 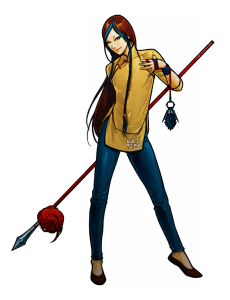 "Warfare is deception. The decieved are at fault, dolt!"

Magaki's servant. He (we think it's a he) challenges the winning team, but gets thrown into another dimension by his master, and later kills him in revenge.

The main antagonist of Buriki One, Silber is a powerful martial artist who constantly travels in search of new challenges. He enters Buriki One tournament, intrigued by the gathering of numerous martial artists and their various disciplines.

"The reason for victory doesn't matter. The strong win, and that's it!"

The very brash and noisy protagonist of Buriki One, Gai utilizes a free-form style known as Total Combat. Deciding to test his skills, Gai enters the Buriki One tournament and becomes a rival to the American boxing champion and protegé of Silber, Rob Python. 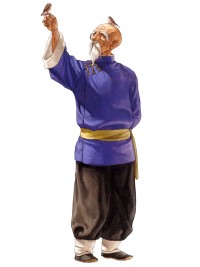 "I may be old, but I'll never lose to an inexperienced brat like you!"

Master of the legendary fighting art known as Hakkyokuseiken, Tung was the former sensei of Jeff Bogard and Geese Howard who made a vow not to train any more disciples after the latter killed Jeff out of jealousy. He competed in the first King of Fighters tournament held by Geese, but lost. Living his current days in retirement, Tung occasionally enters a competition to keep his body and mind in shape.

The King of Fighters XII 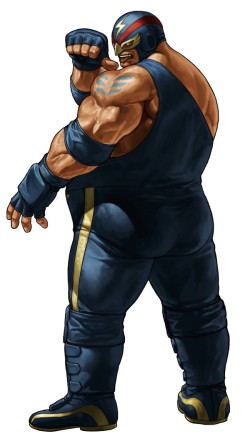 A professional wrestler who appeared in the first Fatal Fury game. Originally, he was bribed by Geese Howard into serving him, but after Geese's defeat went straight and narrow, reverting to his kindly Big Bear persona. He doesn't make an appearance in King of Fighters until XII (although he was originally considered to represent England in '94). His Face persona is still Big Bear, but Word of God says that Raiden was chosen over him due to a lack of villains in XII. He eventually leaves Geese's employ to return to his homeland, passing up King of Fighters for many years due to his satisfaction with his Face and Heel personas. While there's a slight misunderstanding about his current allegiance, Raiden decides to join Kim and Hwa Jai, believing that it will help boost his reputation as a fighter.

The King of Fighters XIII

Yet another fighter who debuted in the original Fatal Fury, Hwa Jai is an arrogant Muay Thai fighter and early rival of Joe, he becomes a more formidable fighter after getting a little tipsy. He was defeated by Joe and became his friend and sparing partner. Now he teams up with Kim Kaphwan and Raiden in King of Fighters XIII, seeing the tournament as a chance to revitilize his career and get another shot at besting Joe.

The leader of Those From The Distant Land and the mastermind behind the events of the most recent tournaments. Looks suspiciously like Ash Crimson. 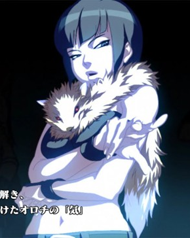 The fourth member of Those From the Distant Land, she has the ability to control the actions of anyone she chooses through invisible puppet strings. Botan established herself as quite the Magnificent Bitch as early as 2003, when it turns out she was controlling Chizuru the entire time. After Mukai's failure, she sets her sights on Rugal Bernstein's daughter Rose.

Adel's little sister and a Rich Bitch to the hilt. While Adel got Rugal's fighting skill, Rose got his sense of unfair play. She's a noncombatant (although skilled at fencing, according to supplementary materials), but very fond of her brother.