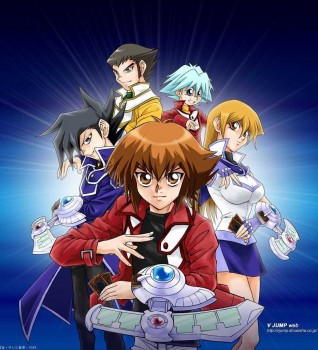 The main characters... at least, some of them.

Ten years after Yu-Gi-Oh, Duel Monsters has skyrocketed in popularity all around the world, to the point where dueling is a professional spectator sport of equal importance to politics and the economy. Like any other athletes, duelists start training at a young age, and a good place to start is Seto Kaiba's boarding school, Duel Academia, a high school where kids come to learn how to duel with dreams of becoming the next King of Games.

Not only that, but the game has also gained more importance in dealing with the structure of the universe itself. The are now some Mon-like counter-parts to the cards called Duel Spirits and a Spirit World where these spirits live. Under these circumstances, new Big Bads appear every now and then trying to Take Over the World by making use of these powers.

Yu-Gi-Oh GX is the story of a group of Duel Academia's Students thwarting the plans of these new threats while dealing with the dueling school in general. It particularly focus on Juudai Yuki (Jaden Yuki in the dub), a Osiris Red student [1] who happens to be The Hero and Yugi's replacement protagonist, and his friends and rivals.

Before going any further, readers should know that the manga completely differs in plot and Character Development (especially Juudai) from the anime that came before it.

Season by season, as Story Arcs pass, the cast grows into Loads and Loads of Characters, as different students graduate or arrive and villains are defeated and replaced. The manga, which came after the anime, uses the same characters and the same setting but includes none of the arcs covered in the anime. So far, it's not entirely clear whether this will turn out to be a good thing or not.

The anime has a very Post Modern-esque tone, blending elements of Gaming and Sports Anime And Manga, Mind Screw, and Deconstructor Fleet. The absurdity of the Serious Business of Duel Monsters is taken Up to Eleven, with entire educational and athletic industries centered around the game, to make you repeatedly say, "You have got to be kidding me." Meanwhile, the plot has serious, painful, traumatic psychological effects on everyone involved, particularly Juudai, whose psyche collapses under the pressure and power and responsibility he's burdened with. "I've lost a card game! I have no reason to live!" suddenly isn't funny anymore, particularly for the Marufuji brothers. In short, it's a very self-aware Genre Busting series that plays some tropes absurdly straight and others painfully realistically.

The things that fans love about the show tend to be the same things critics hate about it, from the lack of anything in common with the original series (aside from the card game) to the utter lack of Cleaning Up Romantic Loose Ends. Many fans also feel the existence of Yami no Games Ret Cons the end of the first series and the destruction of the Millennium Items. The dub was, predictably, as badly macekred as the original, with severe awkwardly censored references to death. There's also a strangely sharp similarity in the Lampshade Hanging and fourth wall breakage of some episodes in the dub's third season to that of Yu-Gi-Oh the Abridged Series. Observe -- a parody of a parody of your own work.

The dub is available on Toonzaki, but it's... well, the dub.

It was followed by Yu-Gi-Oh 5 Ds. Juudai also appears in the Yu-Gi-Oh Tenth Anniversary Movie that teams him up with Yugi and Yusei.

Retrieved from "https://allthetropes.org/w/index.php?title=Yu-Gi-Oh!_GX_(anime)&oldid=1901917"
Categories:
Cookies help us deliver our services. By using our services, you agree to our use of cookies.