Everything About Fiction You Never Wanted to Know.
(Redirected from Banjo-Tooie)
Jump to navigation Jump to search 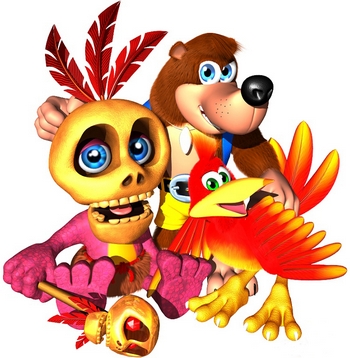 A seminal Platformer series, created by Rare for the Nintendo 64 and fondly remembered by many children of the 90's, the Banjo-Kazooie series (sometimes simply referred to as the Banjo series) tells the tale of a lazy bear, his avian best friend, the nasty witch who likes messing with their lives, and lots and lots of shiny golden puzzle pieces. Traversing many strange and improbable worlds, the dauntless duo of Banjo the honey bear and Kazooie the breegull go about Saving the World, with the help of moleish mentors, cute bird-anteater... things, and a very liberal helping of British humour.

Tropes used in Banjo-Kazooie include:

Grunty: I can't believe you went in there, wash your hands now, filthy bear!

"A-maizing! I corn hardly believe it! You wheatly sorted out those pesky flies!"

"Remember Canary Mary? Did you have fun racing her? How I laughed when I was setting up those levels. I'm still laughing!"

"What was that, you got me now, you've really angered this old cow!"

Scrotty: I don't care. Any doctor will do.

"For my next trick, I may take that Pinata franchise down the Survival Horror route. What do you think? They go bad, trap you in a cabin, and you have to fend them off with a shovel handle."

"Yes, there is a Lady of Games. Not that it's any of your business. She invented the first games to feature pony-riding, lovely kittens, and ninjas being blown up with rocket launchers."

"I invented the First-Person Shooter, you know. Wish I hadn't bothered now. Have you seen how many of the things there are? I expect there's even a Space Marine in this game somewhere."

Banjo: Right! C'mon, Kazooie, let's go and see where that door that's just opened leads to.
Kazooie: Do you reckon that's the end of the game?
Banjo: I doubt it. We've not had the credits yet.
Kazooie: That's true. Okay, let's go!
(Banjo enters the doorway... roll credits!)