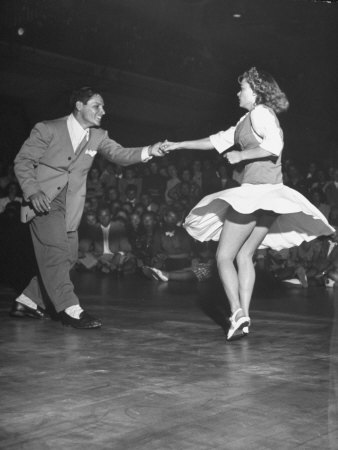 Do the boogie, hot doll!!

The Stormy Forties was a memorably turbulent era, forever linked in the public consciousness with World War II (1937/1939-1945), the development of the first atomic weapons and subsequent attacks on Hiroshima and Nagasaki. This also marked the start of the Cold War and the Arab-Israeli Conflict. But this era also brought many other changes on the world's political map. The Soviet Union annexed Estonia, Latvia, and Lithuania, while Burma, Iceland, India, Indonesia, Israel, Lebanon, Pakistan, Syria, and The Philippines gained independence from various European and American colonial empires. New regimes also emerged in existing countries; Republican Italy, West Germany, Red China, and East Germany all emerged in the second half of the decade.

While functioning radars were actually developed in the 1930s, they were first widely used in this decade, with several of the World War II combatants adopting and/or improving the relatively new technology. The first military jeeps were developed for the United States Army in 1940; the private companies creating them introduced civilian models in 1945. The German V-2, introduced in 1942, was the first successful ballistic missile and served as the progenitor of all modern rockets. Jet aircraft were still in an experimental phase during the start of the decade, but the jet-powered Messerschmitt Me 262 (1942, Germany) served as the first operational jet fighter aircraft, the first of many.

Television was still in its infancy. At the start of the decade, only a few countries had operational television stations (including the United States, United Kingdom, Germany, France, the Soviet Union, Mexico, the Free City of Danzig, Poland, Japan and Italy), and said stations only broadcast in major cities. Only a very limited number of people owned or had access to a television set - as of 1941, WRGB in Schenectady, NY was the only TV station outside a major world city anywhere. Later in the decade, the Philippines, Czechoslovakia, Chile, and the Netherlands would get their first experimental broadcasts. Commercial television got its start in this decade with the launching of early privately-owned networks.

The hit toy of the era was the Slinky, a helical spring which stretched and bounced up and down. Developed by engineer Richard Thompson James, it became commercially available in 1945. Tupperware, an airtight plastic container for storing food, was created by the eponymous Earl Tupper in 1946. The first commercial microwave oven was introduced by Raytheon in 1947, based on the experiments of inventor Percy Spencer. Velcro was invented by George de Mestral in 1948, though it would not become commercially available until the late 1950s.

The cinemas of several countries managed to produce influential films. The Golden Age of Hollywood was still ongoing, and hit films such as The Maltese Falcon and Casablanca were arguably among its best products. The Film Noir genre rose to particular prominence. British cinema had some major hits in the adaptation of Shakespearean works by Laurence Olivier and the exemplary noir The Third Man. In France, influential directors such as Marcel Carné, Robert Bresson, and René Clément scored major hits in the aftermath of the War. Italian neorealism was developed in this decade, with major directors in the genre including Roberto Rossellini, Vittorio De Sica, and Giuseppe De Santis. In the Soviet Union, Ivan the Terrible by Sergei Eisenstein was arguably the most notable film of its decade. Meanwhile, a new generation of directors managed to produce their own hits. In Japan, new director Akira Kurosawa began his career.

As for fashion, styles for dresses, suits (especially zoot suits) and sportswear were a continuation of 1930s silhouettes, like shoulder pads and backless evening wear, only more robust, mannish and simplistic. Hairstyles for women were often long, permed, rolled-up and pompadoured, in which they often showed their foreheads. Fedoras and Latin American influenced hats were popular headwear, while high-heeled wedgies, mary-janes, close-footed oxfords, peep-toe pumps or platforms were popular choices for footwear. Gloves were a must. The decade also introduced a new fabric - nylon - used in hosiery, toothbrush bristles, ropes, and parachutes. During the war, due to fabric rationing and the closing of fashion houses in Paris, many day dresses were strictly knee-length and plainly decorated, nylon stockings suffered shortages due to the need for parachutes, and sportswear was often substituted for casual wear. Many more had innovated themselves in order to be more stylish, even while working on factories. For instance, women applied makeup on their legs in place of wearing stockings. After the war, restrictions were still implemented but were gradually relaxed, until in 1947, a Parisian designer named Christian Dior and created a new set of style which included long full skirts, rounded busts and narrow shoulders. Journalists had dubbed it the "New Look" and the innovative style lingered on until the end of The Fifties.

For music, jazz was the main ingredient to swing (the rage of the dancefloor), bebop (the slow, mellow, sexy tune), and Latin dances like mambo, salsa and conga brought by soldiers. And then, before The Fifties popularized teen sensations, Frank Sinatra was the teen sensation.

See Also: The Roaring Twenties, The Thirties, The Fifties, The Sixties, The Seventies, The Eighties, The Nineties, Turn of the Millennium and The New Tens.

Popular tropes included in this period are
Examples of The Forties include:

Works that are made in this time period

Several of the music performers and composers of the era would enjoy long-lasting careers.

Works that are set in this time period are