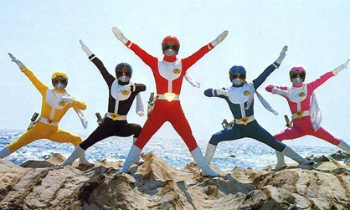 The Goggle V. In case you're wondering, yes, we're putting a girl back into the core team.

It all happened one day when Professor Hideki Hongō went to investigate Wolfborg castle in Germany...only to find the previous resident reduced to bones, and the Dark Science Empire Deathdark ready to execute their plan to, you guessed it, Take Over the World. The defenseless Hongō is attacked, but thankfully, a world class-explorer named Ken'ichi Akama comes to his rescue, thus learning the story of Hongō and his squadron, the only group capable of stopping Deathdark... the Goggle V!

Akama is then promoted into the leader of the Goggles, Goggle Red, while Hongō's Computer Boys and Girls bring out those chosen to become the members of the Goggle V including Kanpei Kuroda, Saburo Aoyama, Futoshi Kijima and Miki Momozono. While they're completely unrelated, they share a strong sense of justice, so after hearing Hongou's explanation, they immediately agree to become members of the Goggle Five. Together, they fight the Deathdark Empire to protect peace!

This season would be the last season of Sentai to use the usual Scarf of Asskicking. And after the previous season which featured an all-men team, this team brought back a girl to the team and as of the time, was the youngest character to be a Sentai warrior, being a 16 years old (until Dairanger). Aside of starting the trend of Title Scream, this also marks the first Sentai work of Hirohisa Soda, who'd later work on Sentai until Fiveman. However, if there's one thing that is quite known about this team is that the constant mistaking that the team is a group of gymnasts, since the weapons are made of gymnastic apparatus, never mind that the theme was more like creating a better future with good science, as well as utilizing some ancient civilization gems.

Their goggles actually do something (though not unusual), and they're not used for shipping, by the way.