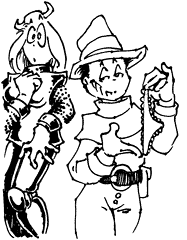 This thief is unrestrained by those pesky laws of physics. Leave what they want in a timelocked diamond-hard safe underground in a room filled with lava past a pit of crocodiles and it will be gone in the morning. Should they choose to, they could steal your underwear (while you're wearing them!) without you noticing anything, or they could steal a jewel from in front of a dozen attentive guards without any of them seeing it go. When they're stealing a thing that can't be stolen in normal circumstances, like landmarks, geographic features, or abstract ideas or concepts, such as knowledge, ability, or souls, it's Monumental Theft.

Possibly you will be treated to a long detailed explanation of how they did it later in the show, or maybe it's just magic.

For a thief who isn't 'impossible' so much as 'too good to be true', it's a Classy Cat Burglar or a Gentleman Thief, respectively. Compare with Phantom Thief.

Examples of Impossible Thief include:

As the Trope Codifier and a character appearing in Video Games, Live Action TV and Western Animation, her and her crew's examples go here..

If the game mechanics let the player's character steal ridiculous things or under ridiculous circumstances, see Video Game Stealing. Examples here should be limited to impossible stealing that happens as part of the storyline.

Retrieved from "https://allthetropes.org/w/index.php?title=Impossible_Thief&oldid=1884314"
Categories:
Cookies help us deliver our services. By using our services, you agree to our use of cookies.